When I was expecting Ben (and probably Daisy too, if I’m honest), I read so many blogs, books and magazines that gave me conflicting advice; if you eat this when you’re pregnant, your arm will fall off; if you don’t use cloth nappies, you’ll single-handedly destroy what’s left of our ozone layer; if you don’t breastfeed, your child will grow up to be a sociopath… the list was pretty endless. So, in honour of all my friends that have just announced that they’ve got one in the oven, I’ve written an open letter that includes five of the things that I wish someone had told me – but if you’re looking for advice on placenta recipes, you’re pretty much going to be out of luck….

First up, let me give you a frickin’ big high-five; you only went and made an actual human being! Admittedly, depending on what stage of pregnancy you’re at, it might be the size of a biscuit crumb / fingernail / grape but still, you’re building a person – you’re like Dr. Frankenstein, but, y’know, less freaky. Fist bump!

Now we’ve got the celebrations out of the way, I’m going to dispense some advice. I know, I know, since you announced you were t’up the duff, you’ve had nothing BUT advice; from well-meaning Auntie Jean to that one friend who ALWAYS thinks they know best, nobody is ever backwards in coming forwards with advice for a pregnant lady. But the thing is, I’m going to give you a few pieces of information on the things that REALLY matter; like what biscuits are best to eat one-handed while feeding and where to buy leggings that accommodate the biggest of bumps and don’t give you a camel toe (because, let’s be frank, you’ve got enough to worry about without showing off your lady-bits). 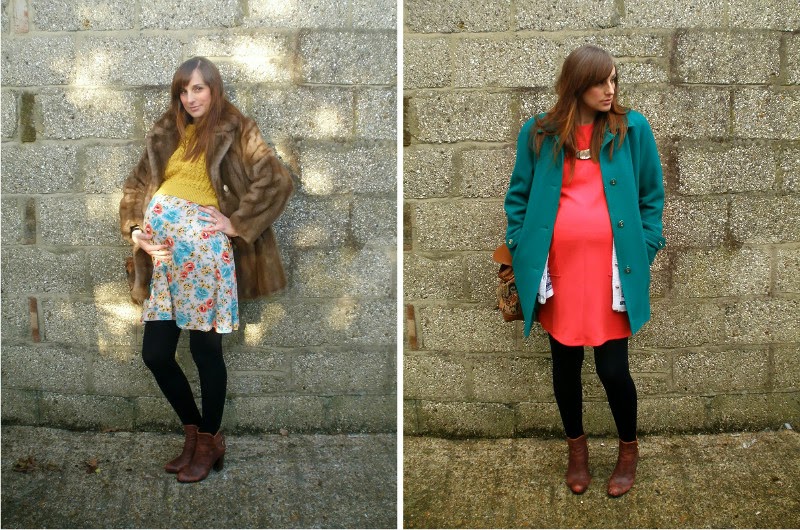 1. Leggings are a more than acceptable wardrobe staple for pregnancy.

I’ve had lots of friends who swear by pregnancy jeans, but I just couldn’t bloody well stand them. With their stupid elastic panels that made you feel like you were being slowly suffocated from the waist up, to the fact that the only place they fitted properly was round the ankles, by the time I had Daisy my thoughts on maternity jeans had gone from indifference to hatred. I also suffered terribly with hot flushes, which meant that denim was a complete no-go – remember that episode of Friends with Ross and the leather trousers? That was me, but I was fatter, and crying. Leggings were their softer, cooler, easier counterpart, and the best thing was that I could literally just wear them all the time. Work? Leggings with a dress or tunic. At the weekend? Leggings with an oversize t-shirt or long top. At home? Pyjamas… but you get my drift. You can buy special maternity leggings, but just try buying a normal pair in a size up and wearing them under your bump first – I challenge you to tell me this isn’t more comfortable that squashing your thighs into hot, sweaty denim. Some people are sniffy about leggings, but when you’re smuggling a beach ball, being comfortable is the most important thing.

2. You won’t need three novels in your labour bag. Or a crossword book.

Packing a labour bag is like packing for a month long mystery holiday – because you know literally nothing about what’s going to happen, the temptation is to just put everything you’ve ever touched into a suitcase. This is pretty much what happened when I was expecting Ben; I had a suitcase, a holdall, a pillow, two dressing gowns and a pair of slippers – and my labour had three false starts so we spent almost three days just loading and unloading the car. When I arrived home with him, a good 80% of everything in the suitcase hadn’t even been touched; from the sixteen bottles of Lucozade and the healthy ‘energy’ bars to the book about Kate Moss and the three back issues of Elle magazine, I didn’t use any of it. Instead I spent most of the time sucking on the gas and air, laughing and weeping intermittently. My top essentials are: 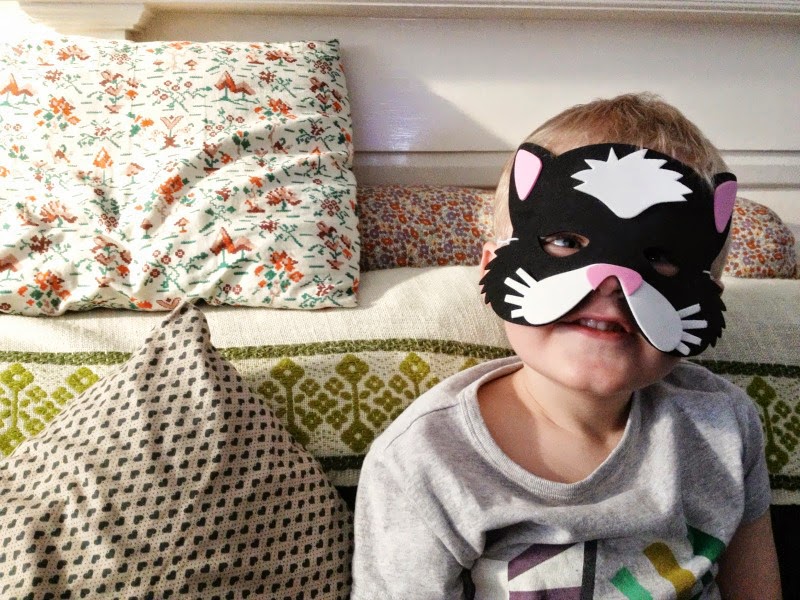 3. Your labour probably won’t go according to plan – but that’s OK!

I know a lot of parent bloggers who have very different ideas about how labour should be; some like homebirths with no intervention, while others like the safety of the hospital and the chance to get off their faces on every form of pain relief for miles around. The thing is, you can plan and plan and plan for L-Day as much as you like, but the chances are that things won’t go as you expect; if you’re keen on a natural birth with no pain relief, and you end up with an epidural, don’t worry. If you’re adamant you’re going to have a homebirth, but end up having a C-Section, it doesn’t matter. If you don’t get time to have the pain relief you were so set on, then chest-bump to you lady, because I didn’t manage to be that hardcore. If things don’t go according to plan, don’t beat yourself up about it; however your little round-cheeked milk monster gets into the world, you should just concentrate on the fact that you MADE A HUMAN BEING. Like, from scratch. You’re spectacular. Come here, give me a high five.


4. Breast isn’t always best. Except when it is.


Crikey, I could write reams and reams on the subject of breastfeeding; not because I’m a huge boob expert, you understand, but because if anybody has failed spectacularly at breastfeeding, it’s me. *Stands up and waves* I wrote my own story about breastfeeding here, where you can read in detail about why I didn’t manage to feed either of my children for more than six weeks, so I’m not going to rehash all that – I’m just going to say that you should decide on a feeding method that works for you. Yes, breastmilk is the best option, but no, your child will not grow another head / turn out to be a sociopath / hate you forever if you ditch the boob juice for formula – I formula fed both of mine, and they’re both (fairly) well adjusted, bright, happy children who are ill incredibly rarely *frantically touches wood*. I spent a long time feeling guilty about my decision to bottle feed which was ridiculous; they were both much happier with bottles, as was I, which ultimately made me a better mother – seriously, I’ve done a bit of both, and nobody gives a shit how you feed your child, as long as you’re both happy. If you do decide to breastfeed and it works out well for you, that’s great – just don’t let ridiculous corporations or people tutting force you into feeding your baby in a public toilet. You have every right to breastfeed in public, regardless of what anybody thinks – whop that boob out and be proud! 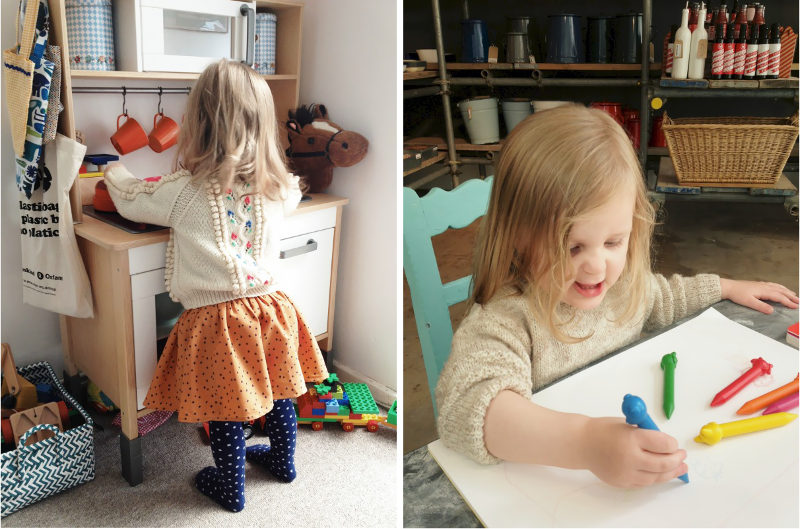 5. Not using cloth nappies doesn’t make you an environmental criminal.


Again, another guilt inducing subject that gave me sleepless nights. As someone who is fairly concerned about the planet, I’d decided that I was going to cloth nappy Daisy as soon as she was big enough; I stocked up on various sizes, found liners and boosters, sorted out the bucket and the cleaning liquid…. and we used them for a week. I had roughly three different brands, and could not get them to stop leaking – one time it was like a leakage in a shit factory, and I couldn’t find the source, it just kept on coming. It could have been that I wasn’t putting them on right, or packing them in the right way, or that the covers weren’t tight enough around her legs, but either way we gave up and switched to disposables – Nature Babycare for a while, but they were pretty pricey and in the end we swapped to a supermarket brand which did the job perfectly adequately. Do I feel guilty about the environmental impact? Yes. But not so much that I would have kept Daisy in nappies that weren’t working for her, just to limit my contribution to landfill – my priority was her being happy and comfortable, and she certainly wasn’t either of those things in nappies that constantly leaked. There are other ways of offsetting the carbon from using disposables, such as using the car less and walking more, composting household and food waste and about a hundred other things – so it’s not all bad.

So there you have it, My only piece of advice to you is to follow your heart, and your instincts and do what feels right and makes you and your baby happy. There are more than enough people out there waiting to tell you what to eat /drink /do, so I thought I’d give you a heads up on the really important stuff like, y’know, camel toes and shit.

See you on the other side, Mama!