When it comes to craft projects, I’m ever so good with ideas, and not quite as nifty with the execution. I’ve been working on so many little projects and tutorials, that there seems to be half-finished bits of craft all over the house; half-painted tin cans, bits of wood covered in glue and loads of crumpled up doilies. Nightmare. But on the plus side, I have managed to finish one completely (with a little help from the Husband, I have to admit), and so todays post is…. a wire noticeboard DIY tutorial. Whoop! 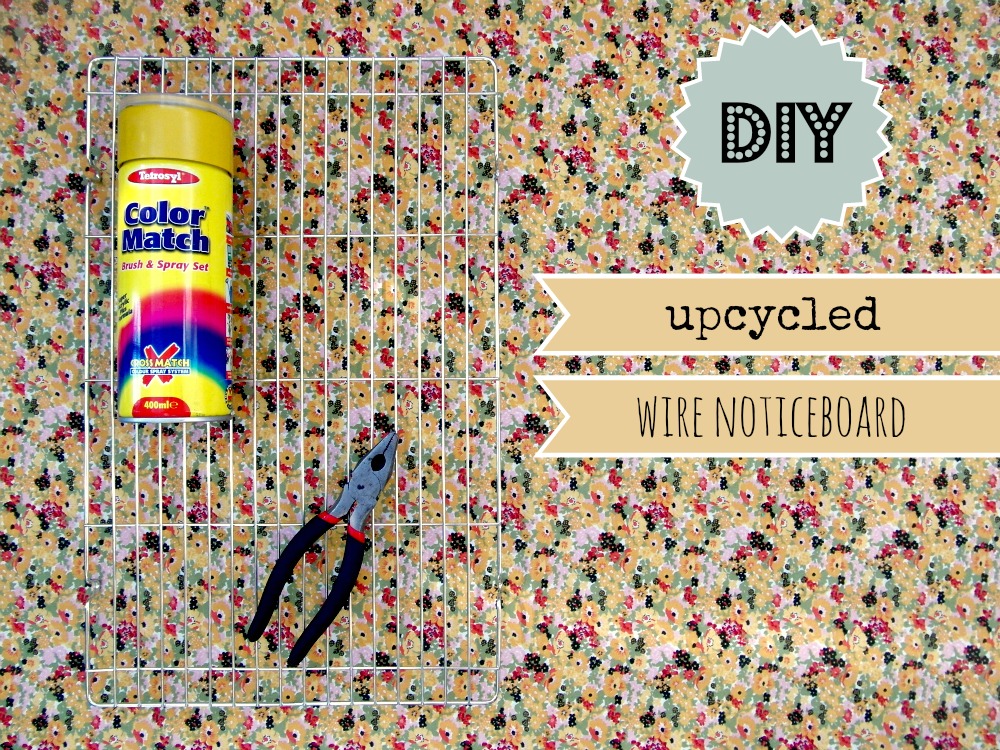 I’ve been trying to finish this project for ages, as I’ve got a real thing about wire noticeboards – we used to have a heart shaped one, but the way it was made meant that it wasn’t much good for holding anything apart from postcards and photos, and the ‘slot-in’ design meant that they got bent. Not a winner with me. I came up with this idea one day when I was wrestling things into my teeny kitchen cupboard, and realised that I had way too many cooling racks (especially as I almost never bake…). So rather than just send them to the charity shop, I decided to put it to good use, two birds, one stone style.

For this little project you will need: 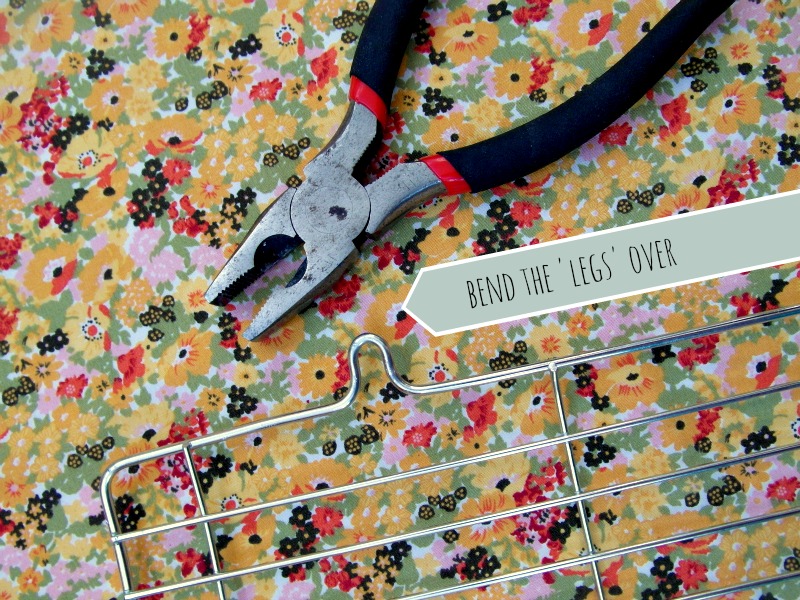 1. Using the pliers, bend the little leggy-things (that’s a technical term) round so they’re flush with the base of the cooling rack.

You might want to clamp the rack, or weigh it down with some wood – it tends to try and ‘fight back’, so it ends out of shape. 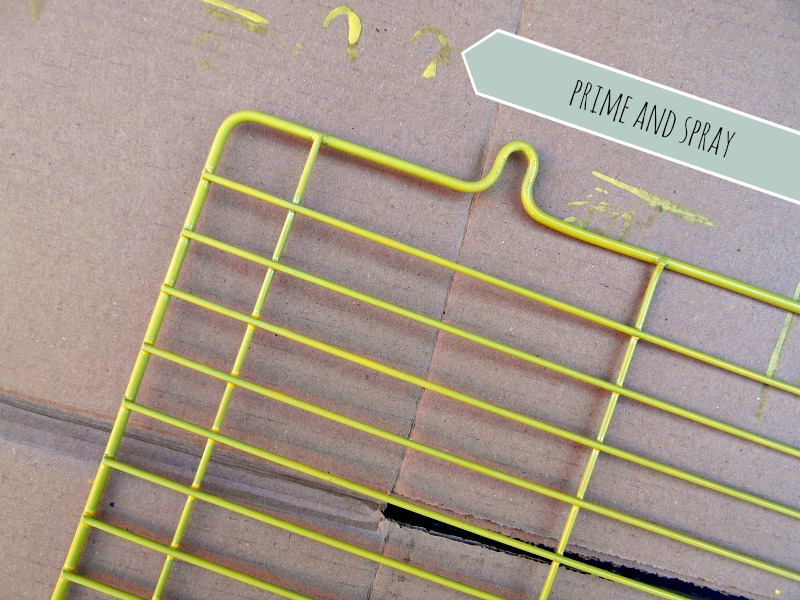 2. Spray your cooling rack with primer, leave to dry and then spray with your chosen paint.
Before this project, I actually hadn’t ever used spray paint before, and so had no idea that ‘blast it from only a couple of centimetres away’ isn’t really the ideal technique if you want it to a) dry sometime that same week and b) want an even finish. My top tip is that less is more, and to treat it like painting your nails – lots of thin coats instead of one, gloopy, drippy coat. Don’t skip the primer step either, or the paint will chip off if you so much as sneeze near it. 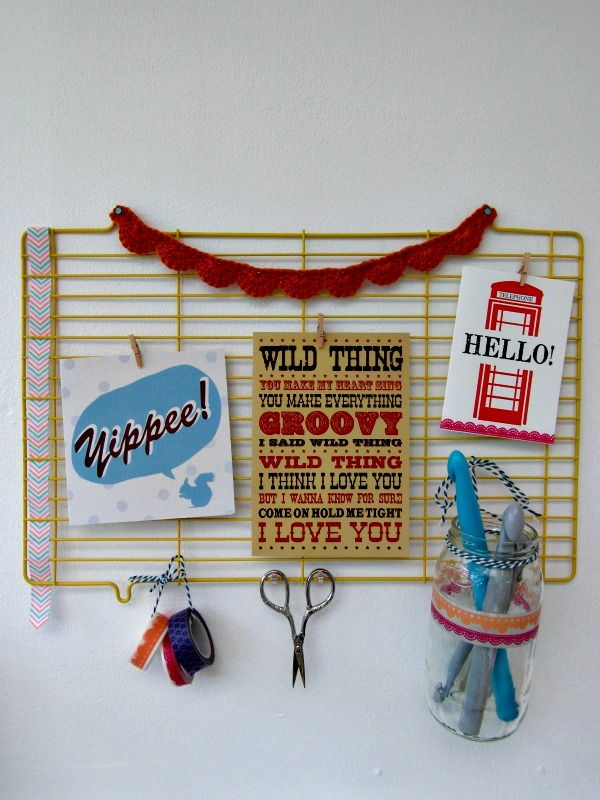 3. Wait until it’s completely dry (at least a day, just to be sure) and then hang it on your wall.
Then get pinning! I used little pegs to clip up my postcards and whatnot, but you could also use mini-bulldog clips, or even those foldover clip thingys (not entirely sure what they’re actually called). The great thing about the structure of a cooling rack is that there’s a way to display pretty much anything – postcards and pictures can be clipped on, ribbon and tape can be woven through…. 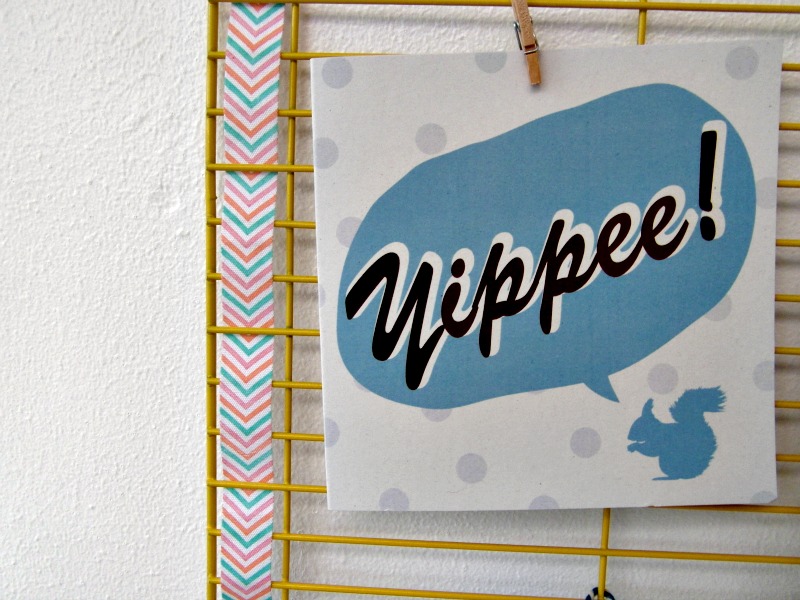 What I wanted most was somewhere to store my crochet hooks, so I wound some washi tape and bakers twine round a jar and then just tied it on. I’m ‘knot’ so good with securing things (guffaw guffaw), so to be honest, I’m just keeping my fingers crossed that it stays up. 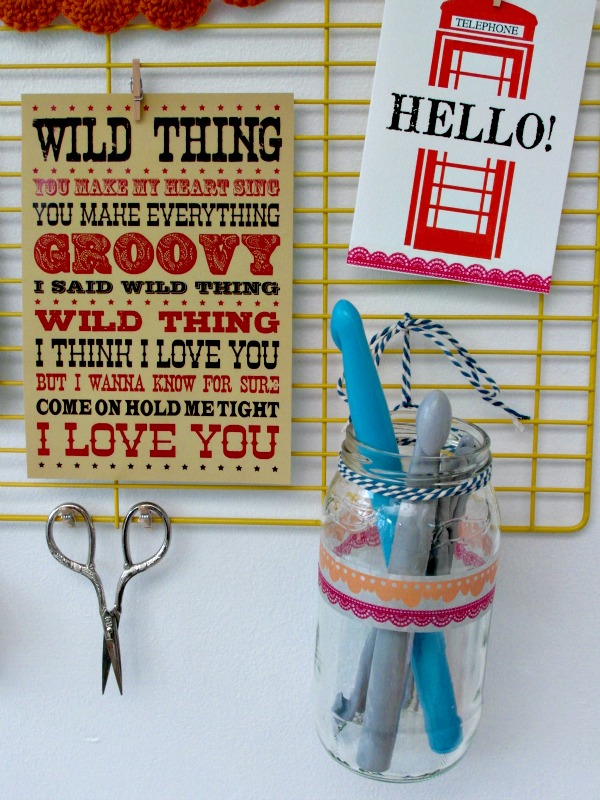 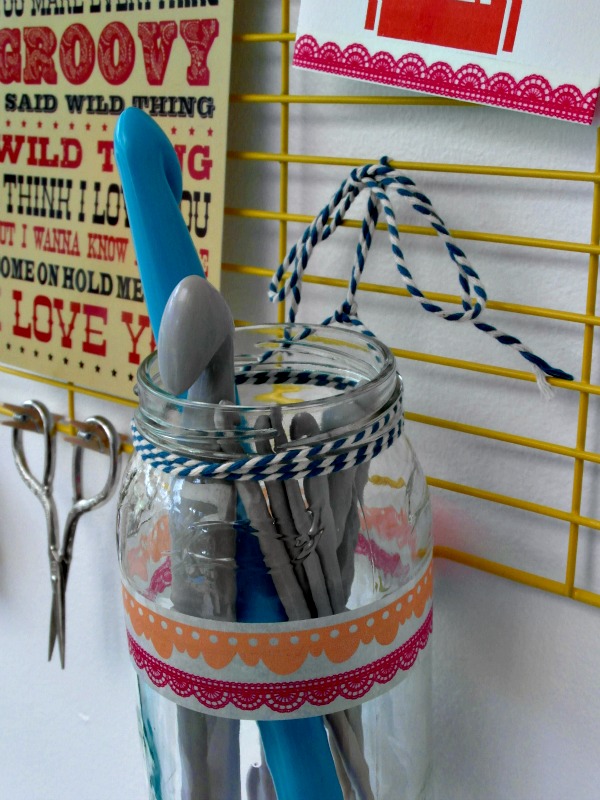 Ta dah! The worlds cheapest wire noticeboard! I’m a bit addicted now, and although it started out as an upcycling-recycling-waste reducing exercise, I’ve found myself searching online for extra large cooling racks. I also keep pondering on the possibilities of having them in every room; another noticeboard in the kiddos room, as a jewellery holder in our bedroom, some sort of utensil holder in the kitchen (actually no idea how that would work, I just made it up on the spot).

Have you upcycled anything lately? What’s been your best project? 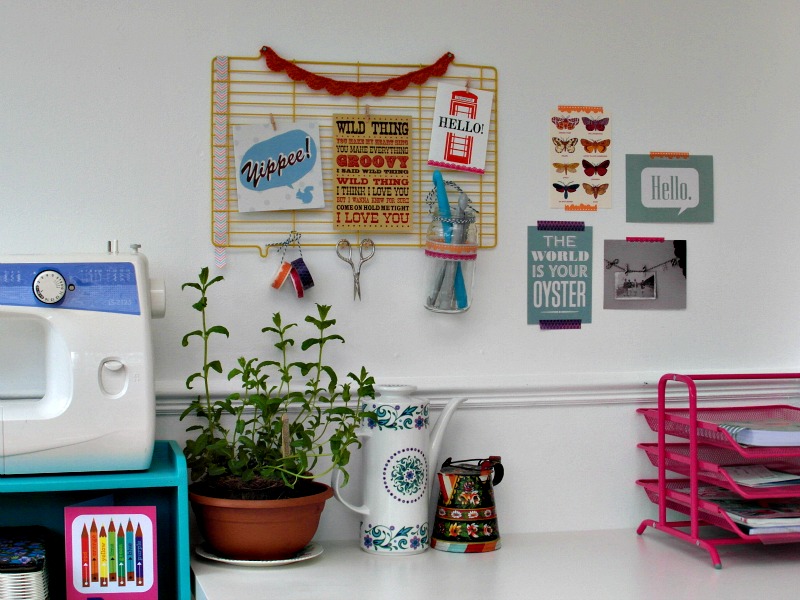