So, it turns out that there’s only two days of December left, and as I’m not so keen on starting the new year blogging about Christmas, I decided to bung all the other crafty bits and pieces into one massive Christmas-fest post. Brace yourselves, people, it’s going to be like you’ve been smacked round the face with yuletide! 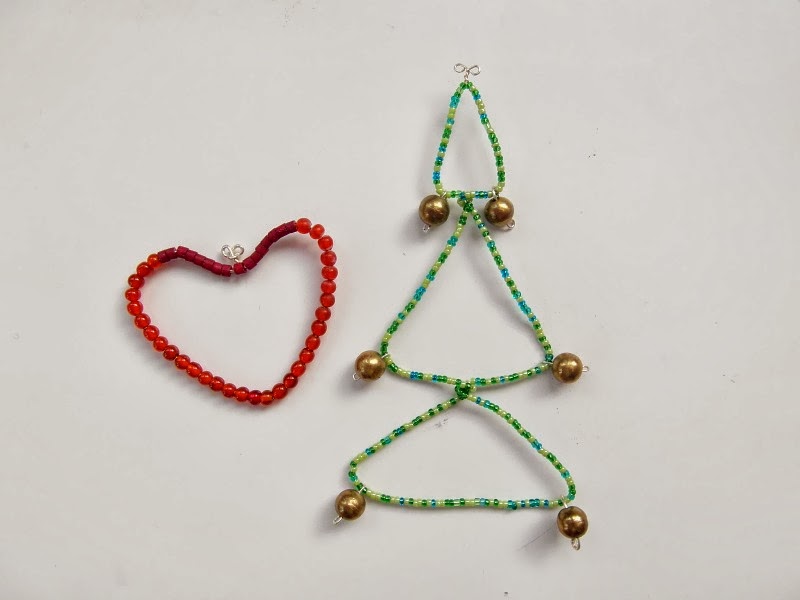 First up, I made some little wire and bead decorations, which basically consisted of threading a selection of beads onto jewellery wire, then twisting it into different shapes until it stayed in place – I secured it at the top, by curling the wire into two loops with needle-nose pliers, which meant there was somewhere to thread the cotton so it could be hung on the tree, or on a garland. I found that it was best to use a relatively thick wire, as it meant it didn’t go all limp when I bent it, and held the shape fairly well – I think I used 2mm or 3mm. 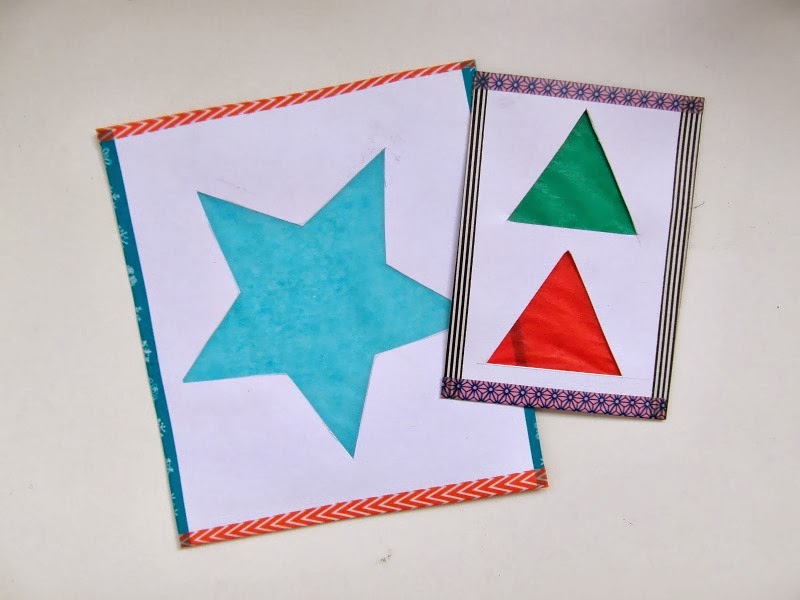 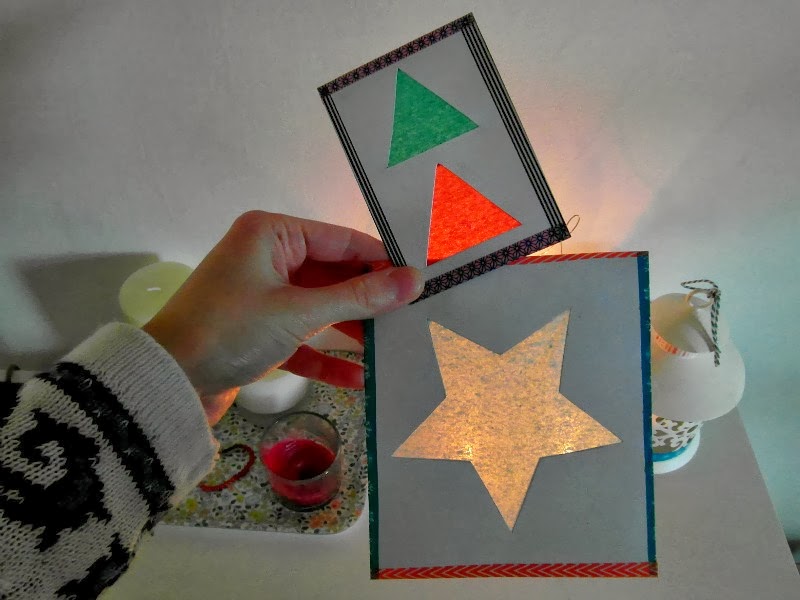 Ben and I had a bit of a crafty afternoon making cards and constructing stained glass windows from card and coloured tissue paper; although actually it ended up with me sat at the table cutting out shapes, while Ben sat and watched the cBeebies Christmas pantomime from the comfort of the sofa. Humph. Anyway, I made them by folding a length of card in half, then drawing a shape on one side, and cutting it out. I glued a layer of tissue paper over the hole, folded the card back over and then stuck washi tape around the edges. Quick and easy – the best kind of crafting! 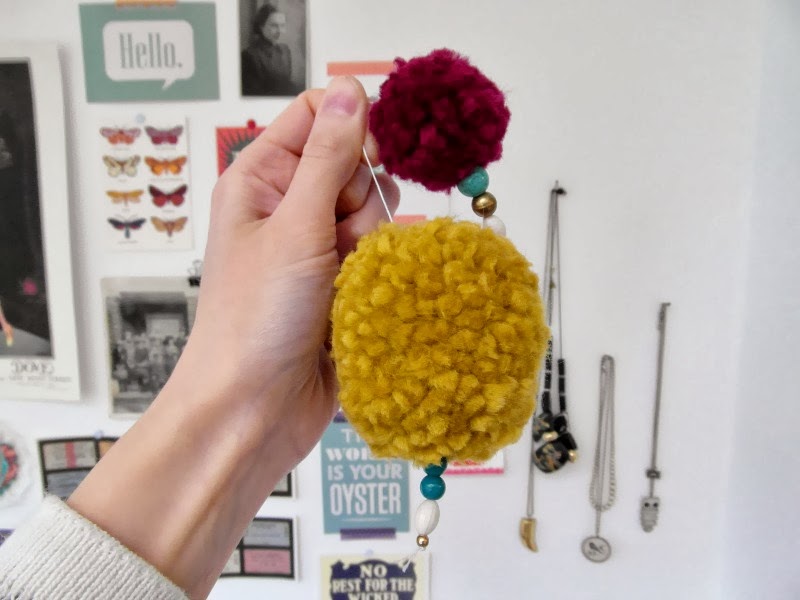 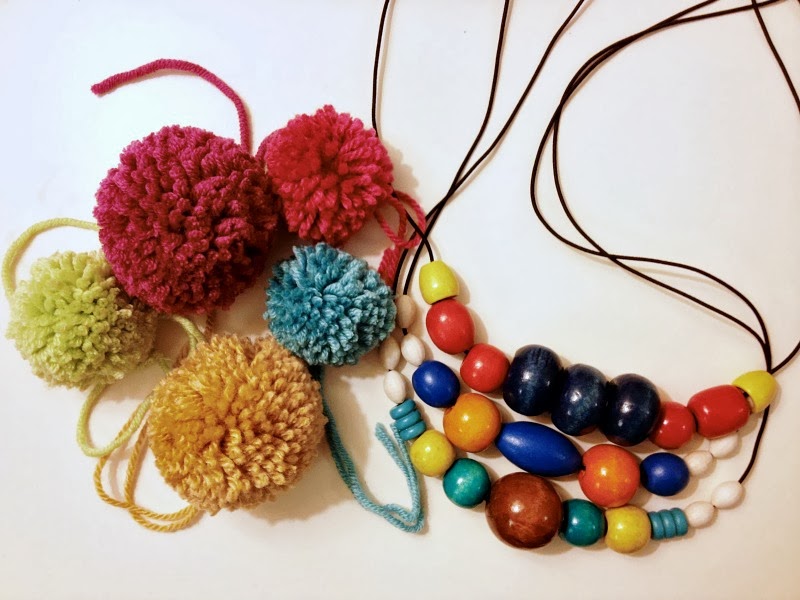 After I finally got round to buying a Clover pompom maker (I bought mine before you were on the telly with your Christmas special, Kirsty Allsopp, so ner ner), I decided that this festive season was going to be packed with the woolly little blighters. I made pompoms to stick onto presents, pompoms to hang up, pompom garlands, and giant beaded pompom decorations (top image). I made these by making two pompoms of different sizes, then threading them onto a long piece of cotton. I popped some beads on either end, tied a loop between the pompoms and voila! You could easily join loads of these together to make one giant pompom-bead-extravaganza, or hang loads of them from the ceiling…. the possibilities are literally endless! 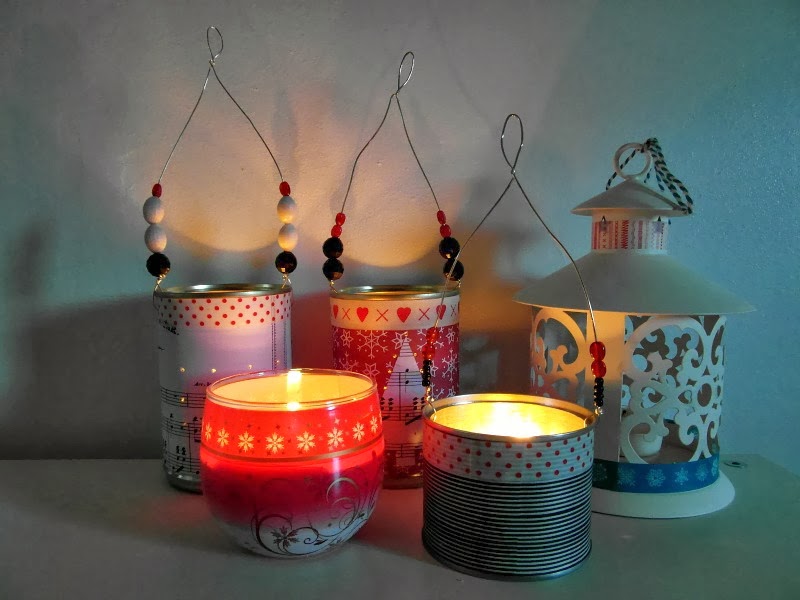 I made some lanterns from tin cans, washi tape and various pieces of printed paper – you can see the tutorial over here.

That was pretty much it – there were a few other ideas I had, involving leaves, giant sticks, mod podge, fabric scraps and various other materials, but they either went terribly wrong or I just didn’t have time to carry them out. Next year! The house still looked pretty festive, and I was pleased with how bright and cheery it was – I made some paper pompoms, which are ridiculously easy and addictive, and I can’t see them coming down any time soon…. 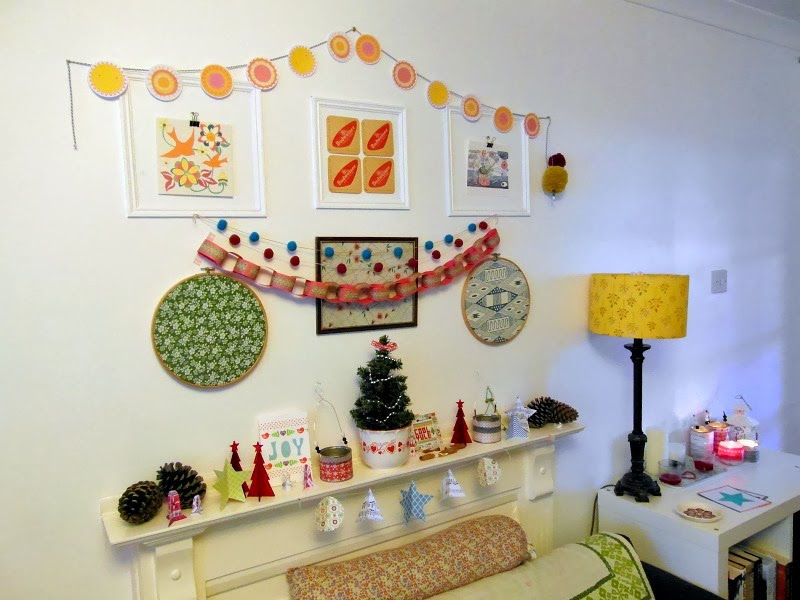 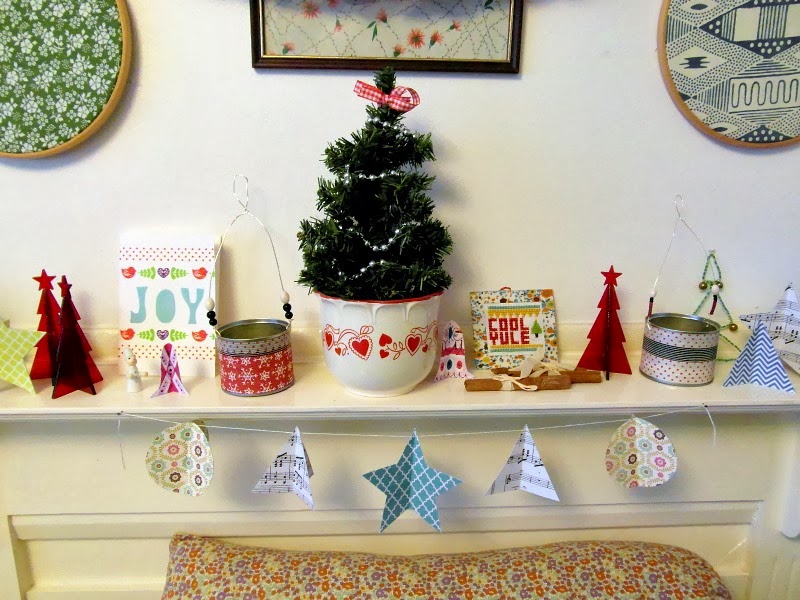 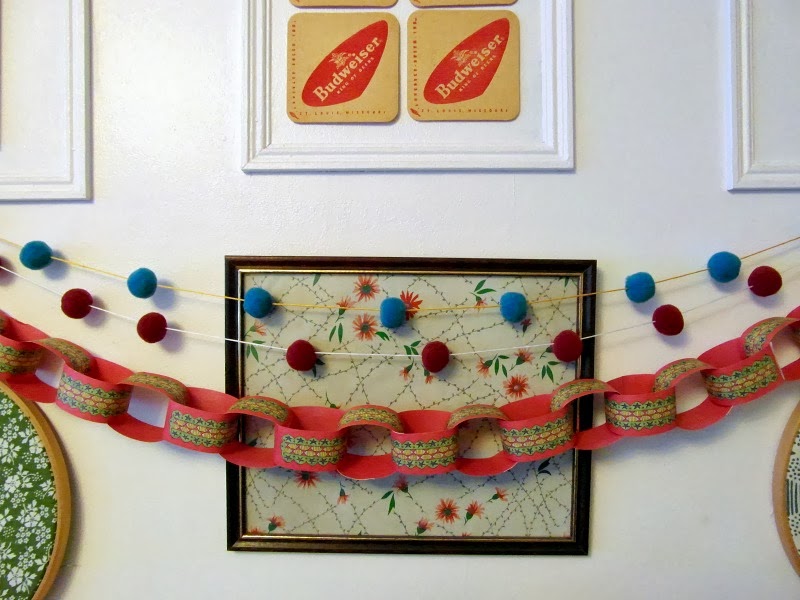 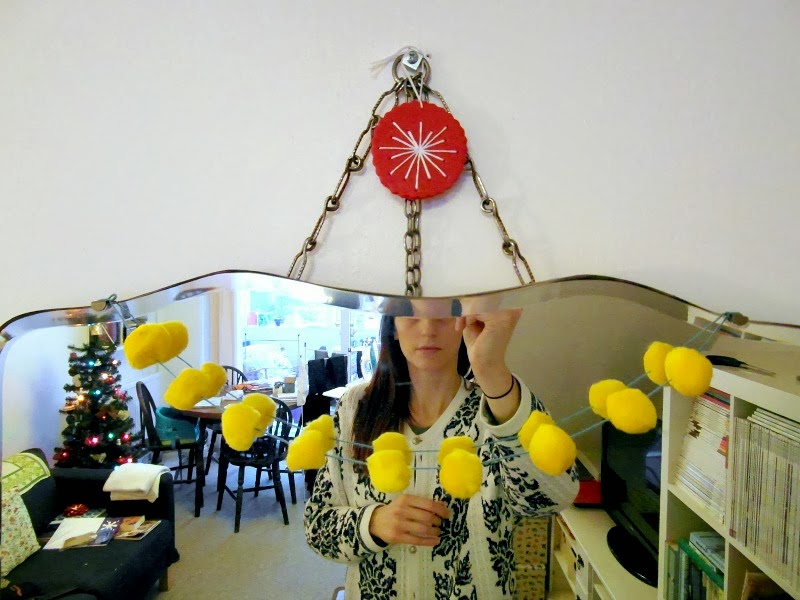 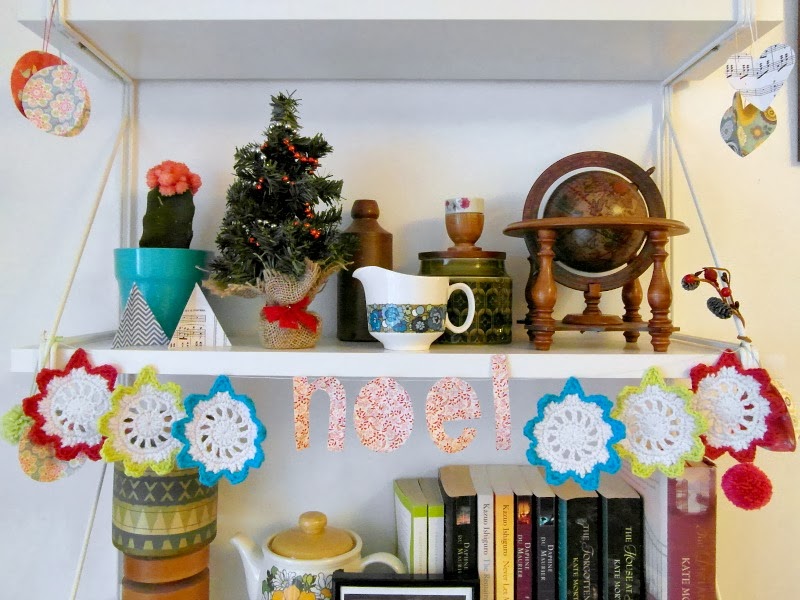 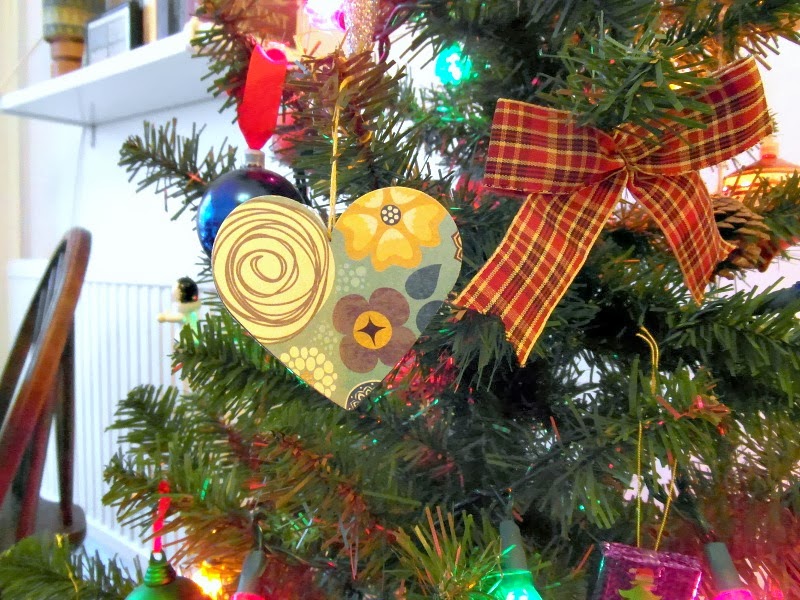 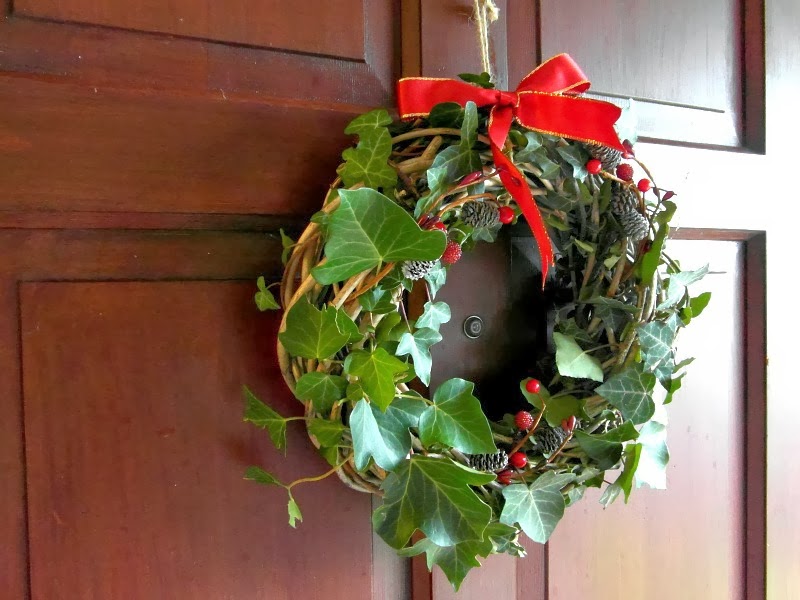 Christmas day itself was a lovely mish-mash of family, food, lovely presents and thrifted triumphs. The kiddos main presents – a bike and a dolls cot – were both second hand, and the Husband and I had worked on them for a couple of weeks beforehand to make them as new-looking as we could. Daisy squealed with delight and tried to get into the cot, and Ben declared it was the ‘best bike ever’, so we considered them both a success. I was hugely spoiled, with some ace knitwear, a couple of dresses and some new craft books left under the tree for me – I finished the day feeling very lucky and very, very full.