I’ve been planning this post since last year now, (since September to be exact – where does the time go?) and I am sooooo pleased to be able to finally write it. It’s probably literally my most anticipated post (for me, anyway. Possibly not for you lot!).

On a thrifting trip last year, I stumbled across an old, tired set of shelves – at the time we were looking for something to make into a toy shop or market stall for Benjamin, which for various reasons didn’t quite work out the way we planned. I ended up with them stuck in the conservatory, in their sorry state, and spent quite a long time considering sending them to a furniture charity shop just to be shot of them. 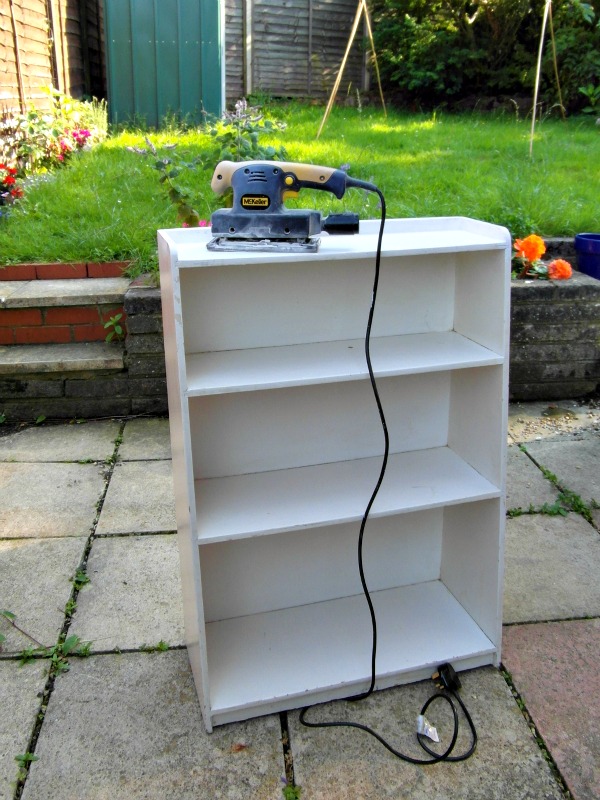 In the end, I decided that I wasn’t going to give into my laziness, and that since I’d bought them, I was going to bite the bullet and clean them up to use in the house. They were covered in scratches, graffiti, chips and gouges, and someone had welded the tackiest (but not in a good way) hook onto the side. Out came the sander, and off we went.

I thought about buying some Annie Sloan chalk paint and almost succumbed to the lure of the ready-made, but when they tried to charge me £7 for delivery, my tightwad tendencies just wouldn’t let me pay. I ended up with a tin of paint from good old Wilkinsons (2.5 litres for the same price as 1 litre of Annie Sloan), some tile grout and a baby milk tin to mix it all in – and I made my own stinkingly cheap chalk paint, a la the ace Lucy from Lulastic (honestly, that girl has saved me a packet with her nifty thrifty ways). Three coats of paint and two coats of varnish later, I give you, the shelves…… 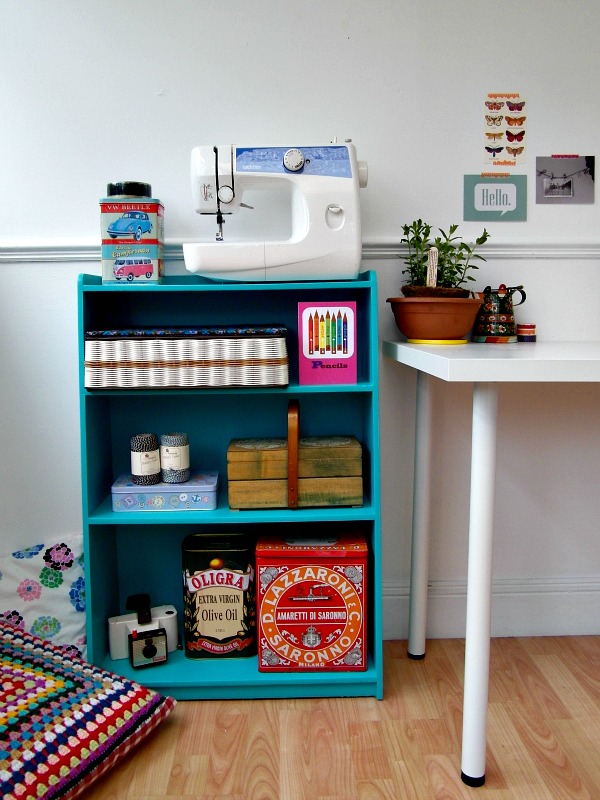 I’m so pleased with them, I can’t even begin to tone down my enthusiasm. I actually kissed them when they were finished. The colour was ace, the paint went on evenly and the varnish sealed the deal perfectly (literally, guffaw). They’re now home to various lovely things, namely two vintage tins that I’m planning on using in the garden as planters (this might actually not happen, as the thought of them rusting terrifies me…) and my vintage sewing boxes. This seems like a good time to share the little corner of the conservatory that I’ve clawed back from the sticky grasp of the kiddos – it was a playroom, but I seem to be amassing so much crafty stuff that I decided I was going to give it all a home. (Just so you know – this side of the camera was impeccably neat, but the other side looked like an explosion in a toy factory. Real life, people!) 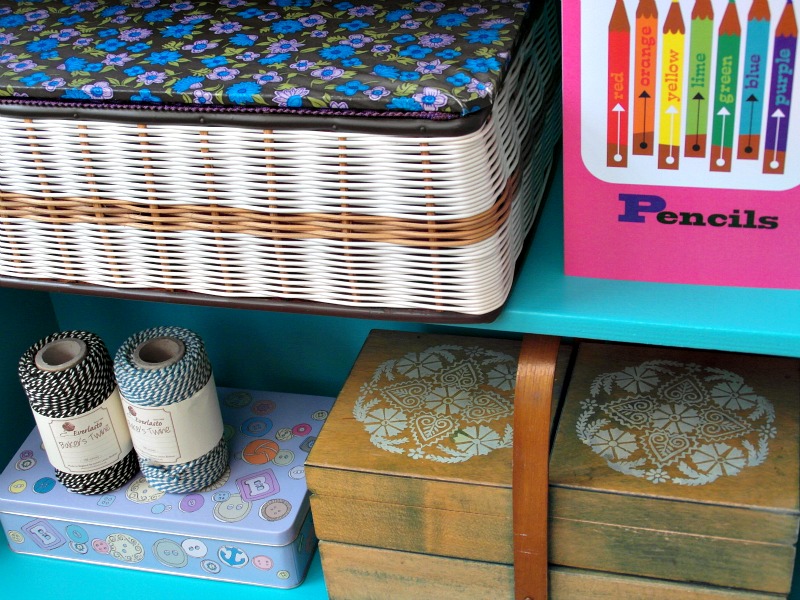 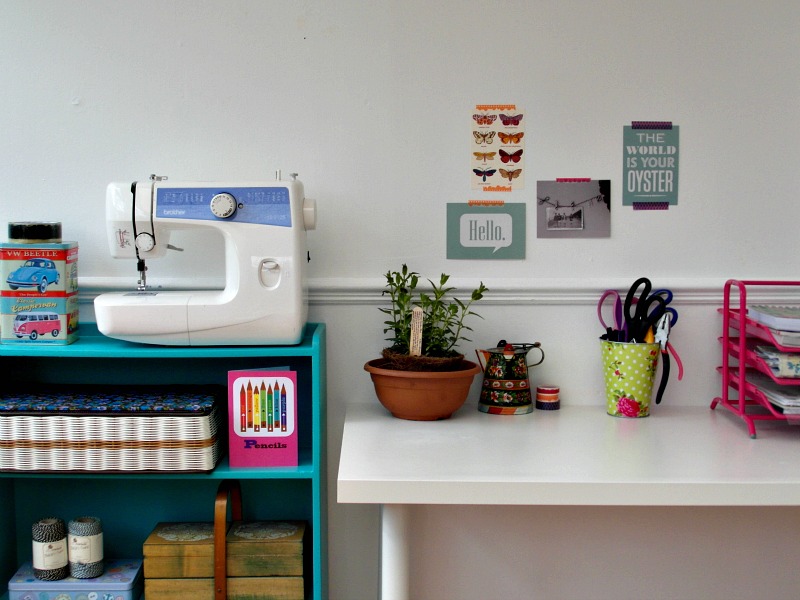 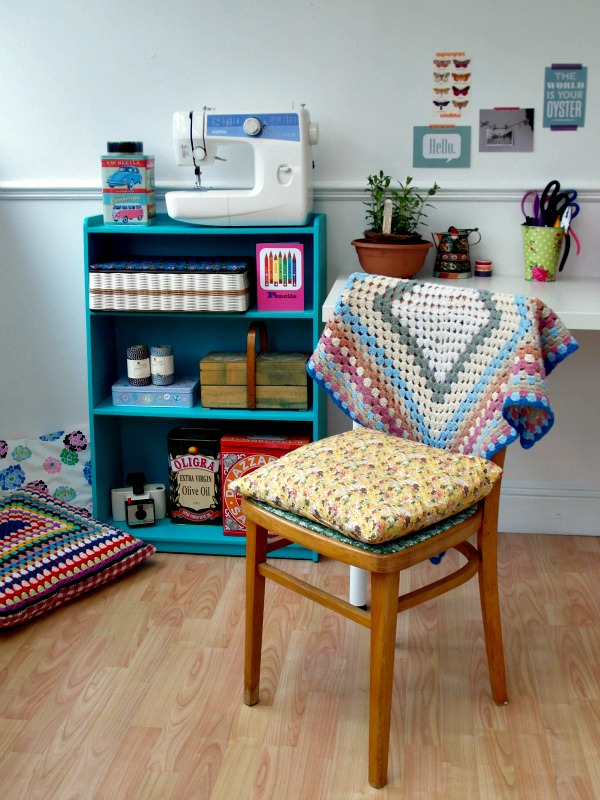 It’s such a light, bright space, but man alive is it cold in the winter. I’ve got a little fan heater, but in the depths of Winter I’ll probably be curled up back on the sofa with the laptop – it’s hard to sew with frostbite.