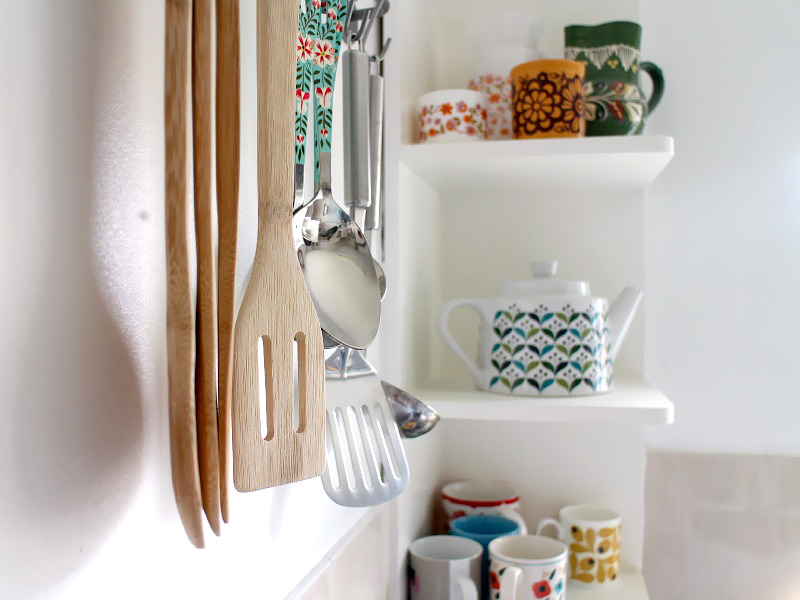 You might or might not remember that when we moved into our house, it was an absolute crap-hole. We’d been told that it would be all fixed and shiny and new by the moving-in date but it wasn’t – so in the end we admitted defeat and did it ourselves. Ali laid new floors and carpets with the help of his Dad, filled holes, sanded, removed artrex (seriously, who the actual hell even likes that stuff?!), plastered and painted for weeks – we probably wouldn’t have been so huffy if we’d bought it, but it’s only a rental!

The kitchen was one of the worst places, and we’ve already given it the treatment once – but there’s still so much that we can’t stand, so we’re going bigger. To give you an idea of just how bad the whole room is, I’ve taken a few pictures…..

The corner shelves in the photo above are really annoying – they’re really far apart and teeny, so technically  a total waste of space and pretty useless. We’re going to be ripping (probably literally ripping as everything in this house seems to have been glued in place!) them off and replacing them with some nice long open shelving on the adjacent wall with hooks for utensils. 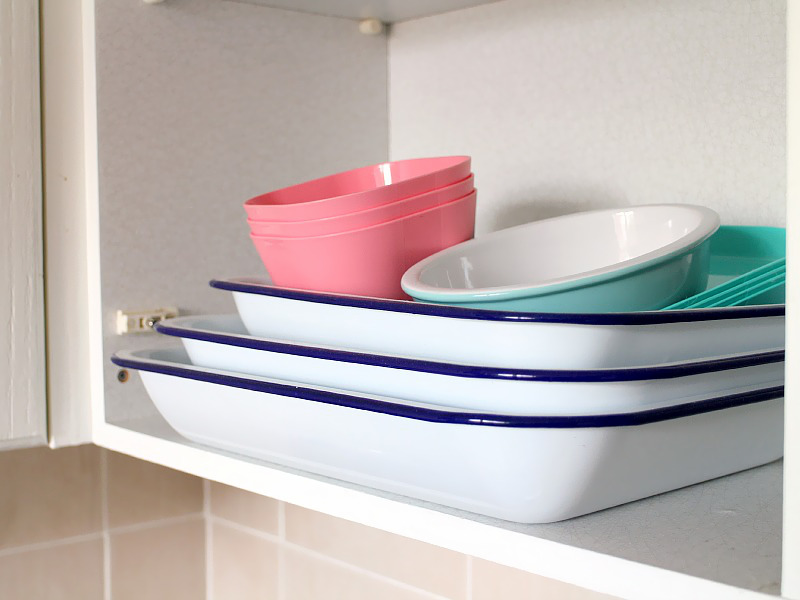 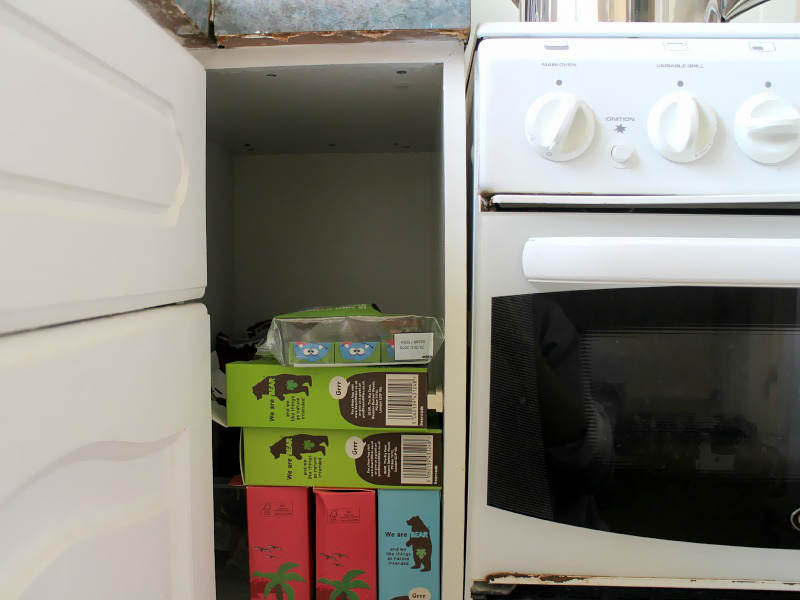 The cupboards are another problem; the whole kitchen seems to have been fitted by a troupe of trained monkeys – the doors aren’t made for the cupboards, and there are various oddities like the strange space above, which is only really big enough for the littluns fruit-snack-thingys. There’s even one door which is completely different from all the others, and doesn’t actually even cover the cupboard opening. Sigh. The plan for the cupboards is to either suck it up and tolerate it, or replace the doors – I’d love to rip the lot out and start again, but I think that’d be pushing it a bit! 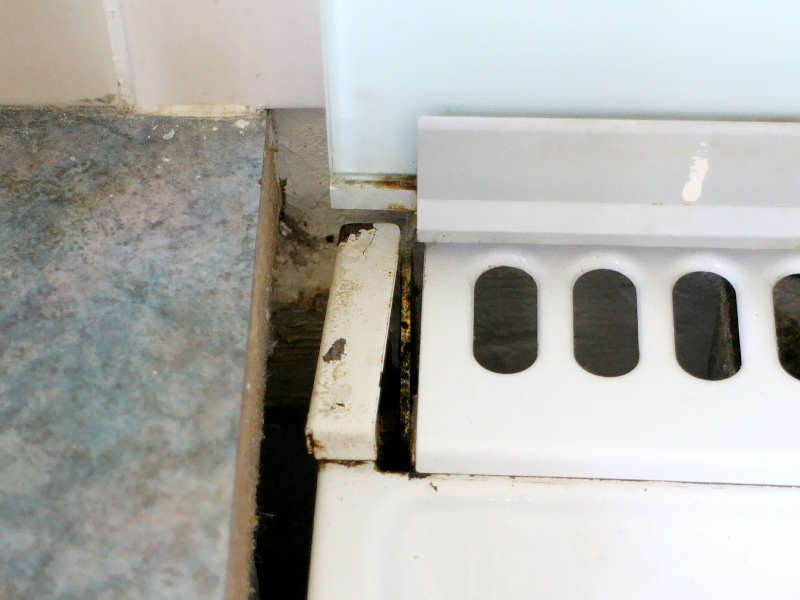 The worktops and tiles are going to be the main changes – you can see from the photo above (which makes me cringe massively) that not only are the worktops a hideous colour, they’re also really REALLY tatty and unfinished. The tiles aren’t sealed around the bottom, so everything is going black where the sink is, so they’re coming off as well – they’re a grotty beige-orange colour, and make the already teeny room look even smaller, so we’re going to replace them with plain white 15x15cm tiles which will hopefully make the whole place seem bigger and brighter. It sounds a massive job, but Ali’s Dad has built their house (he’s an architect) so he has plenty of tips and tools on hand, plus if we get really stuck, Homebase do a worktop fitting service for a pretty decent price. 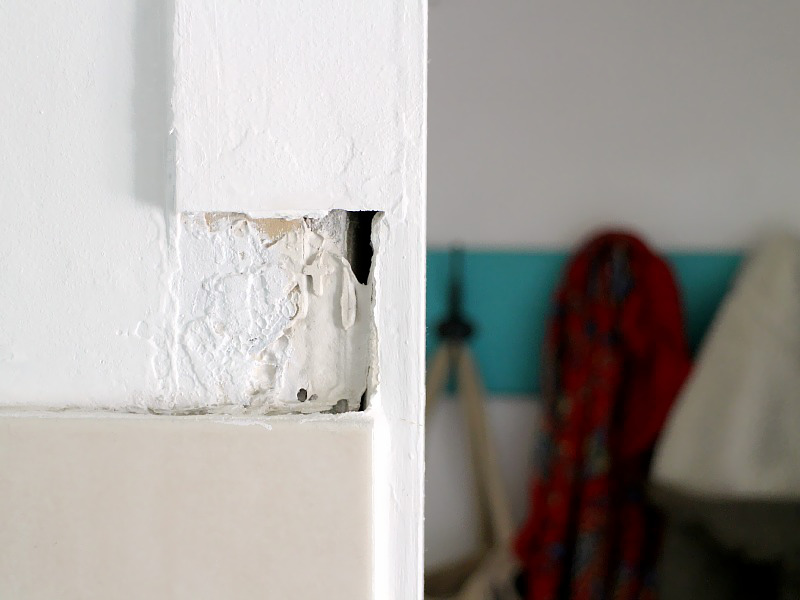 There are also little gems like this (above) all over the place, which I think are just in need of filling and painting over.

I’m under no illusions that it’s going to be Pinterest perfect once it’s done, but to be honest, I’d just settle for clean and finished!

Obviously, one of the things I’m most excited about is organising the accessories and open shelves, so I spent (probably too long) making a little collage of bits and pieces I’d quite like to bring home with us. I’ve found as I’ve got older, I’m tending to prefer things a bit more calm and simple, and a bit less pattern-clashy – the kitchen is such a small room that too many colours and prints just make it seem claustraphobic, so we’re going with simple white tiles, a wooden worktop and some nice rustic-style accessories. Oh, and plants. Always plants! 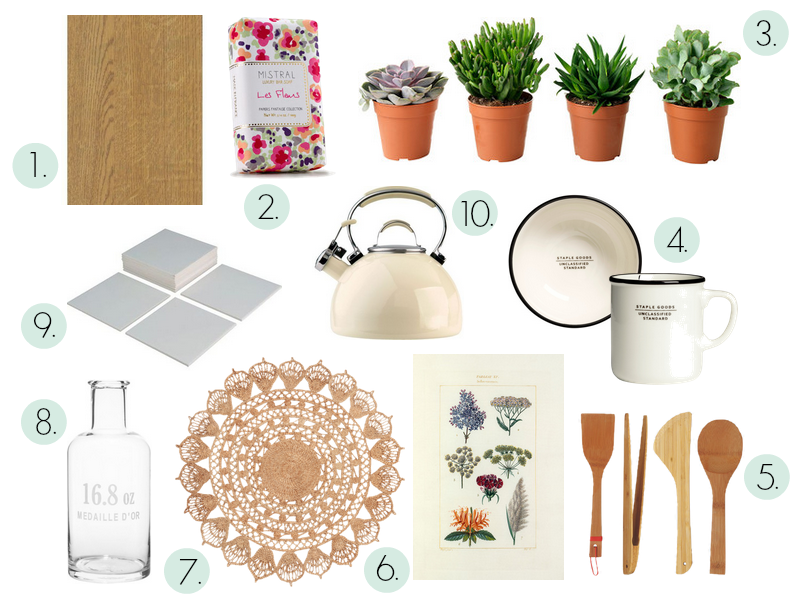 Written in collaboration with Homebase.