When I was expecting my son, I spent the entire pregnancy absolutely sure that I was going to breastfeed him – I was in no doubt that as soon as he popped out, he’d latch right on and away we’d go. In reality, that couldn’t have been further from the truth, and after a myriad of problems (bad latch, bleeding nipples, mastitis and inadequate milk supply to name but a few), I gave up and he was formula fed. I don’t think I ever really got over the disappointment or nagging guilt, and so when I discovered I was pregnant for a second time, I never imagined I would have problems again.

When Daisy arrived, she fed immediately, and the midwife even praised me on my excellent colostrum. I preened my metaphorical feathers, and thought, ‘excellent. This time I’m going to nail it.’ We hadn’t bought any kind of formula feeding equipment, and unwanted bottles given to us by a friend went straight to a charity shop. It literally didn’t even cross my mind that I would have problems anywhere near as bad as I had the first time around.

Once we left hospital, it became apparent that Daisy was having some latching issues. As time went on, I was spending more and more time taking her off of the breast, and trying to get her back on correctly – as any breastfeeding mother will know, the latch is key. Without a good latch, you might as well just chew your own nipple off. She was feeding every two hours, for more than an hour each time, day and night. As soon as she had finished, she was cramming her little fists into her mouth, seemingly still desperately hungry.
Slowly, the old problems seemed to resurface, and I started to dread every meal – I used to hold my breath and bite down on a cushion when she latched on, and would sit there, tense and desperately hoping she would stay on and just feed.

It’s at this point, that I think I should just make it clear that in the first four weeks of Daisy’s life, we had no midwife appointments or healthcare at all. At her heel prick test, five days after she was born, the healthcare practitioner informed me that she would make me an appointment with a midwife for a weeks time, but had to do it when she was back at the hospital. Somebody would call me with a day and time, she said, and ushered us out of the room. Three weeks later, I had heard nothing, and was in the midst of feeding hell. I rang the only number I could think of – my midwife. She was on holiday. A week and a half later, I finally got my appointment, where I was informed that Daisy had tongue tie – this explained why she couldn’t latch, or on the rare occasions that she did make it onto the breast properly, she couldn’t sustain it. I was also told that as she was no longer in the first few days of her life, I had missed the option to have her condition corrected through the NHS, and would have to pay for it to be done privately, something that we certainly didn’t have the money for. My midwife, who was actually seething that I had been treated so badly by our healthcare system, rounded it off nicely by telling me that my daughter would never get any better at latching on, and feeding her would always be a painful experience. 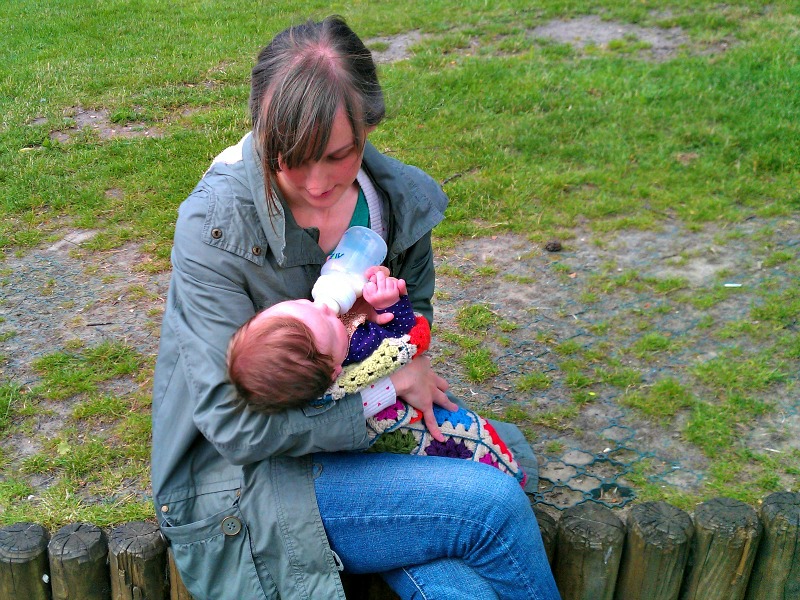 Which brings us up to date. I feel a number of things – anger towards the people who discovered her tongue tie (apparently it was written on my notes, but nobody thought to actually tell me) and did nothing about it. Bitterness towards the woman who simply couldn’t be bothered to follow procedure, and make me
that crucial appointment.  Guilt towards my daughter for letting her down. Disappointment in myself that I had failed to feed yet another child, failed to deliver what I thought was best and failed to somehow discover her condition myself. Which is pretty much why I’m writing this post – I thought it might be a little cathartic, a way to exorcise the demons so I can simply put the whole thing behind me and move on, enjoy my children and not let it taint their younger years. I’ve considered relactation numerous times, almost daily in fact, but as both my Mum and the Husband pointed out, nothing will have changed – Daisy will still have tongue tie, I will still end up in agony and we’ll be in even more of a mess than we were in the beginning.

The breast vs. bottle debate has raged for years, and I have no doubt at all that it will continue to do so – the funny thing is, the majority of us don’t give a Nun’s chuff how other women choose to feed their babies. I might be a formula feeder, but it’s certainly not through choice – I managed to feed Daisy twice in public in those four short weeks, and felt like I’d conquered the moon (admittedly, her head was pretty much buried beneath my shawl, but still….). I felt a swell of pride when I read this post on Fritha’s blog, and decided that had I been living in Bristol, I would have gone along in support regardless. I still practise attachment parenting, ‘wearing’ Daisy frequently, and try my hardest to bond through feeding (skin to skin contact, placing the bottle at breast height, and so on) – when I’m not sending the plastic bottle hateful vibes. I found some useful information through the Sears parenting book, and more here. A quick search via Google produces some good results – after I’d done this, I certainly felt better about the whole situation.

I suppose when it comes down to it, the thing to concentrate on is that although things didn’t go according to plan, and I haven’t managed to feed the way I thought was best, I have two happy, healthy children. And who can ask for more than that?