Every now and then (and these really are few and far between!) I get e-mails from PR agencies or companies asking me to feature them or their clients on here – usually I politely decline (if they actually get my name right) or just ignore the message (if they’ve sent a massive spam-my group e-mail). But when I was contacted from the lovely people at Ask Her Friends, I clicked through to the website and was actually pleasantly surprised. 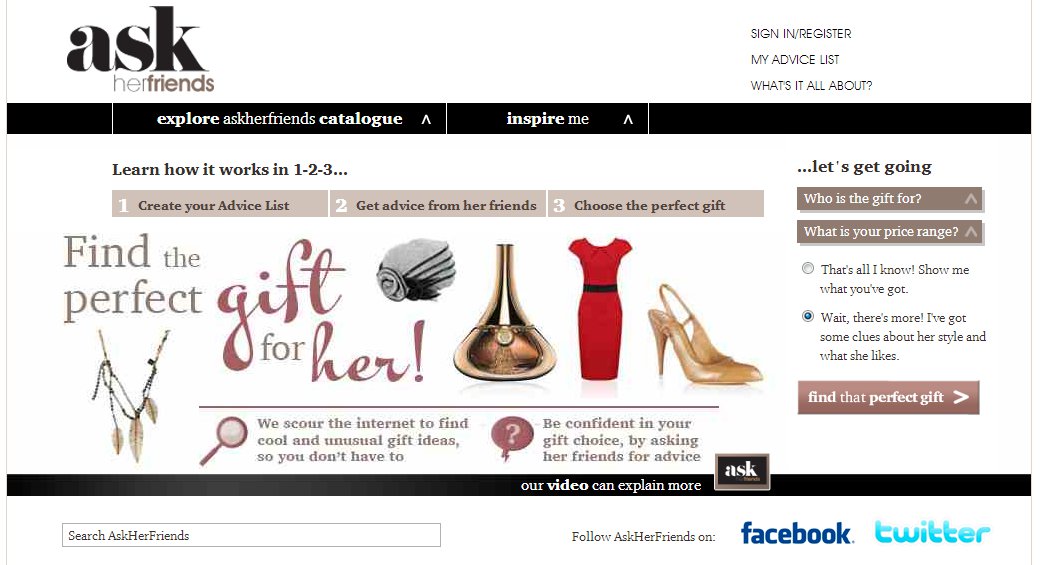 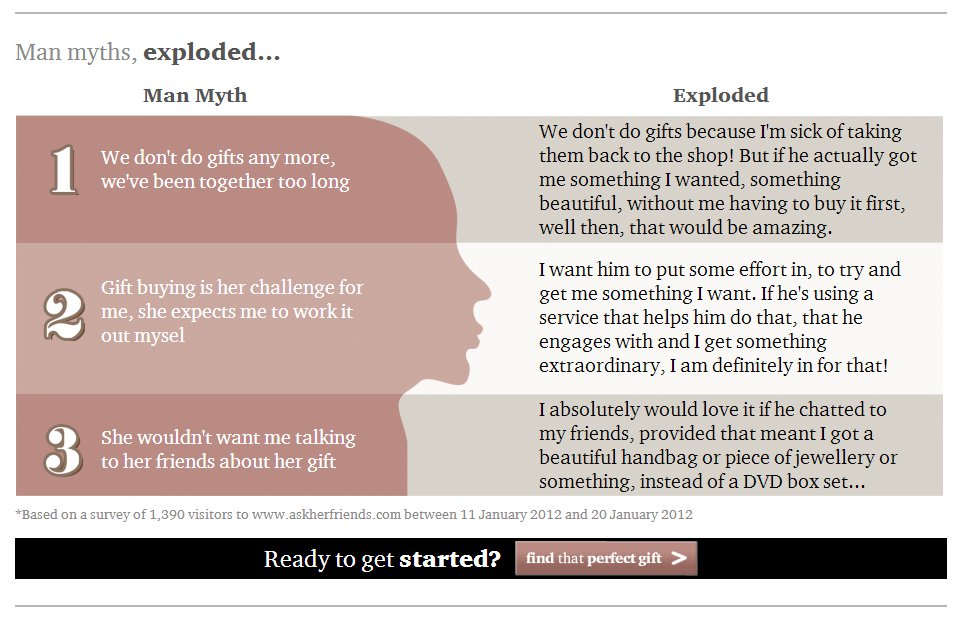 If I’m honest, it’s pretty genius, and I’m surprised it’s taken so long to appear. The founder, Ben, stumbled across the idea after he’d spent countless hours searching for the perfect gift for his then-girlfriend – we all know that most men end up with a bad case of The Fear when it comes to present buying, and he was no different. The aim of the website is to present the customer with a selection of gifts from various brands, tailored to the likes, dislikes and personal taste of the recipient – I particularly like the quiz element, which after answering a short series of questions, presents you with a list of ‘ideal’ presents. I filled it out as if I were the Husband buying for me, and was pretty impressed with the results (coughcoughhinthinthusband): 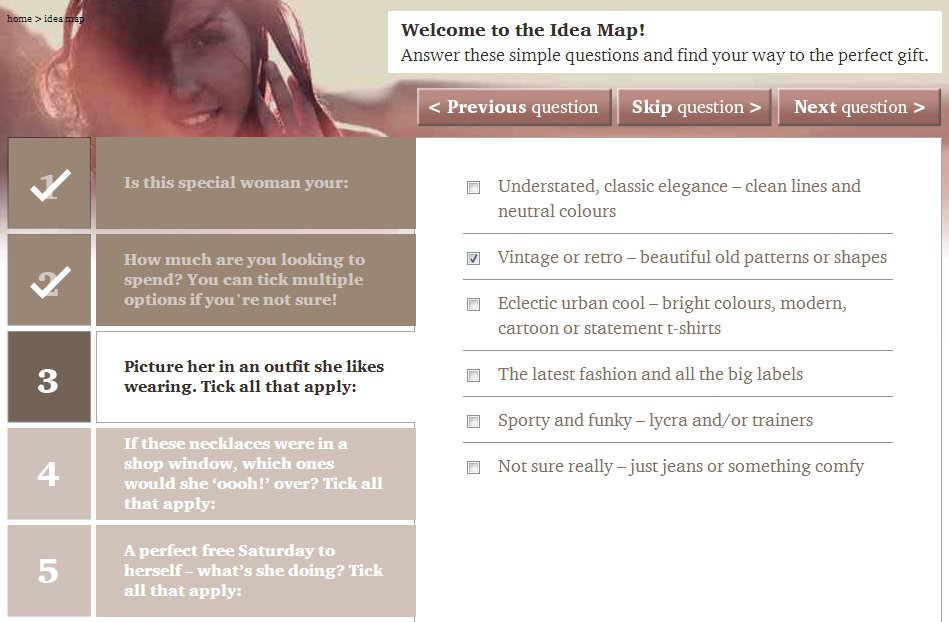 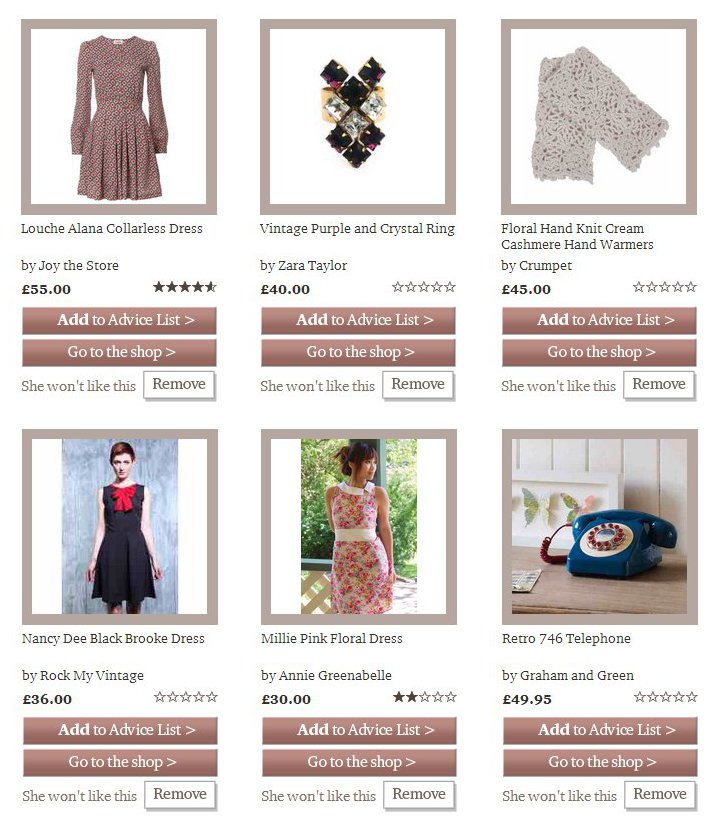 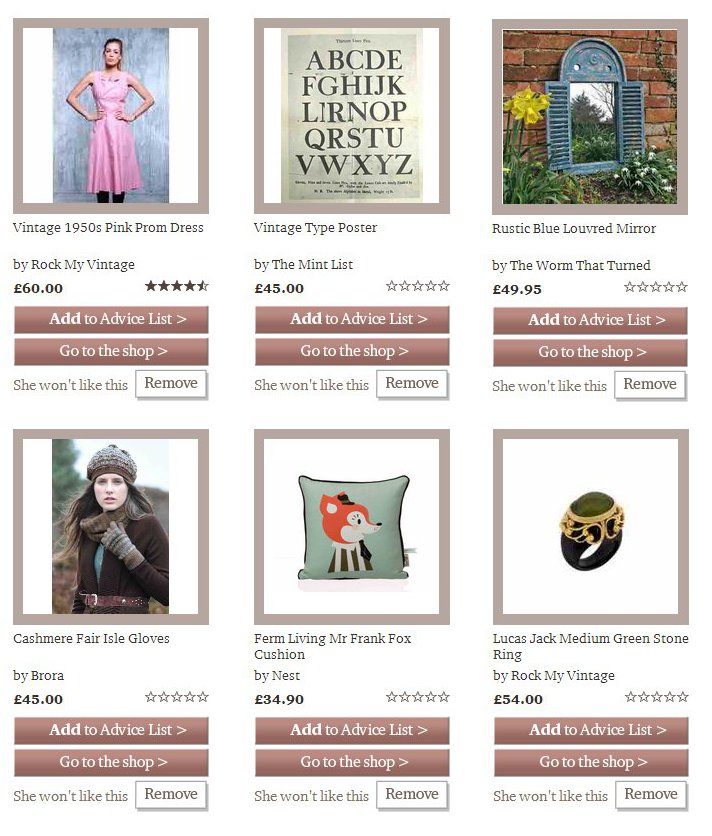 Once I’d had a good nose through the website, I had about a gazillion nosy questions, and was lucky enough to be able to chat to Ben over e-mail, where he spoke about hand-made cards, success stories and worm farms….

AskHerFriends is a great website – how did you come up with the idea?
I find getting a gift for someone almost nerve-wracking –
you’re putting yourself out there, putting a bit of yourself into
it, really. So if it isn’t well-received, that can be really
disappointing – almost like rejection? I guess I’m just over-sensitive! So I
tended to just ask people what they wanted – if you’re getting a gift, you
may as well get them something they want, and if it costs a little bit
more and you have to throw money at the problem, so what? Other people,
like my brother, for instance, would be great at getting gifts for
people, and I was always jealous of how they’d do it – it’s basically
not being afraid of making a mistake. So that was the idea of the website,
really – to try and find a way to make it a bit easier for people to get
ideas, and get comfort that those ideas would work, without taking away the
nice parts about getting a gift for someone – that closeness, intimacy, of
wanting to find them something that they’ll really love, as a token of
your affection for them. My friend and I had been kicking around the idea
of getting that ‘comfort’ by getting more viewpoints on the ideas – asking
friends. And then the rest of the site just built around that, particular our
focus on finding the cooler and smaller boutiques – because gifts from
somewhere a guy could never normally find are much better than something
from a high street store.

Have you had any gift-giving disasters?

I’ve had a few gift-giving disasters. The one I always talk
about was once getting a girlfriend a worm farm. She loved
gardening, and the little garden we had, so I thought long and hard about
something that would be a fun gift, but also would fit in with that.
Obviously she knew what plants and flowers she wanted, so I didn’t want to
intrude on that, and I came up with the idea of a worm farm for producing good
compost. I still maintain she liked it, sort of, but it’s one of these
things that you look back on and think ‘yes, it was quirky, she liked it, but
was it really a great gift?’ And the answer to that is probably
(definitely?!) no. What’s more, we didn’t set it up right, it rained and got
swamped, and all the worms drowned. It was wormageddon.

The last
gift I got for my now ex-girlfriend was an outright success (didn’t stop her splitting up with me though!). It was for Valentine’s Day and I found some earrings that I knew she would absolutely love from
FarFetch, and by now I’d been doing the site for a while, so I had much more confidence in my ability to pick out a good gift. I also made her a Valentine’sDay card out of felt and card, which I’d
found whilst researching ideas for the site in blogs. She absolutely loved it, and I massively enjoyed the feeling of doing something different, not hugely expensive, but with loads of feeling in it and getting it right.

What’s the best success story you’ve heard from a customer on the site?
Well, we
don’t normally get to see the end result, which is a shame, but one person did write to us. It was a guy who had tried to buy his wife good presents in the past – it wasn’t that he was a total leave-it-to-the-last-minute person, but he’d just failed in what he’d bought, and she always either hated it or had to take it back. So, through AskHerFriends, he created a list of ideas for his wife’s birthday, and one of the gifts was a beautiful handbag from Flights of Nancy, something he’d never have found himself. As an added bonus, her friends said ‘yes, absolutely, that totally suits
her’ – happy days!

What are your top picks for Christmas gifts from AskHerFriends this year?

Have you got a Christmas gift list this year, or will you be desperately shopping on Christmas Eve?

There won’t be any shopping on Christmas Eve this year for me – my Mum always says what she wants regardless of what I try to do, and there’s no girlfriend to buy for…!

As well as answering my nosy-parker questions, the lovely people at AskHerFriends have been kind enough to offer a £30 gift voucher, redeemable against any product on the website, as a Christmas giveaway here on the blog. Thanks guys!

To be in with a chance of winning, all you need to do is complete the following two steps:

And that’s it! The giveaway will close at midnight on Wednesday 12th December, and the winner will be chosen at random using a number generator.