Although I wouldn’t class this as a parenting blog (actually, I’m not really sure what category I do fit into – craft? Thrifty? Vintage? Eco-friendly? All of the above?), I’ve posted pictures and little snippets of information about my two kiddos before, and most of you will know that Ben is four, and Daisy is almost one. Although I’m possibly (probably definitely) biased, they’re pretty ace. Ben is funny, and makes me laugh constantly. He has boundless energy, and from the moment he opens his eyes until the moment his head hits the pillow, he is singing, dancing, marching, climbing. At the moment he’s being tested for Aspergers (a form of Autism, for those who don’t know), which means some of his behaviour is, compared to that of his peers, a little off-the-wall. He’s whoppingly clever; he can already read a large amount of words, has the memory of an elephant, and his imagination knows no bounds. The downsides to autism are the personal quirks – small things can upset him, and he can’t always communicate his frustrations effectively, which often results in explosive tantrums. He can’t always understand instructions, but we’ve found that working with a visual schedule helps a lot, and explaining his routine for the day helps him feel reassured. He likes to examine things, regardless of where we are, and often lies down in public – we haven’t quite fathomed out why yet, but have discovered that’s it’s just easier to get on with it. He chews everything, and I mean everything. He once licked a mosaic on the side of our local community centre. He isn’t very affectionate, and doesn’t often make eye contact. He has taught me that everything needs to be questioned; he’s awakened that inquisitive side of me that I think we’re all born with, but often gets squashed underneath the mundane of the every day. He never fails to surprise me. Ben has shown me the world in all its technicolour beauty, his enthusiasm for life is infectious, and he makes me roar with laughter. 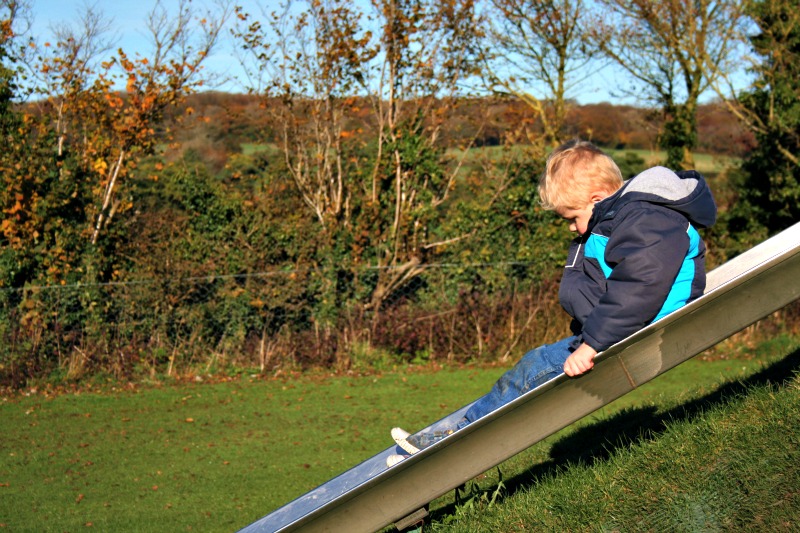 Daisy is an entirely different kettle of fish. As much as Ben resists eye contact and affection, she wants to be snuggled into my arms, pressing her face against mine (often licking it – what is it with these children?!). She loves to interact, and will race across the floor to climb onto our laps. She is incredibly cheeky, and will often respond to a cautionary, “no, Daisy mustn’t do that,” with a well timed raspberry. She squeals with joy when we lift her high in the air, and adores it when we dance with her in our arms. She has an incredible appetite, and attacked baby-led weaning with gusto – her favourite foods are broccoli and cheese (that’s my girl!). She is the polar opposite to Ben, but the way they interact makes me melt. While they do fairly often loudly disagree (usually when she wants to destroy his latest brick construction), the way they look at each other and sit together is nowt short of adorable. He kisses her hello, goodbye and goodnight, and she squeaks in delight – this evening she put her arm around him and leaned her head on his shoulder. And then my heart exploded into a gazillion pieces. 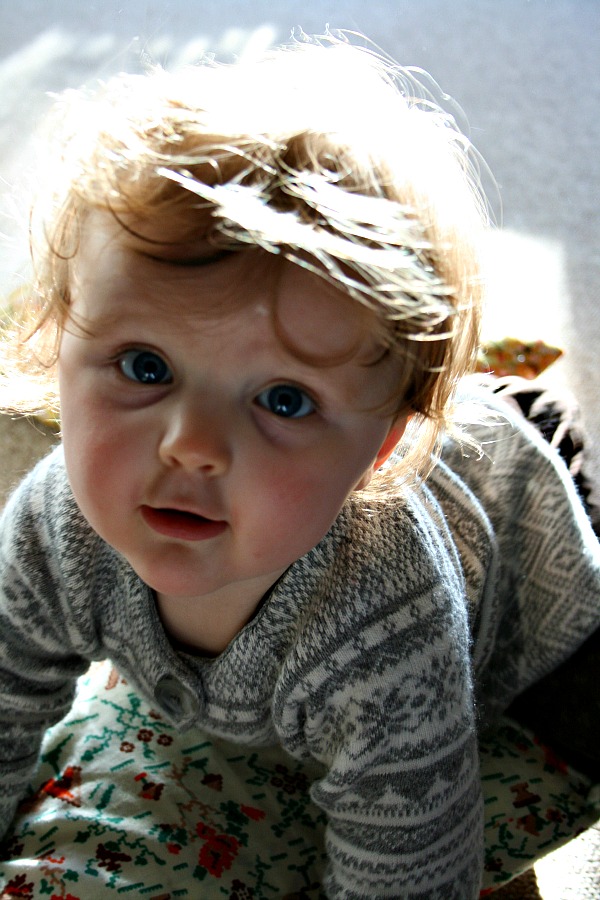 I suppose that what I’m trying to say, is that I’m lucky. I’m lucky to have been blessed with one healthy child, but to be given two is like winning the kiddo lottery. They’re healthy, they’re (mostly!) well behaved, we can afford to clothe them, and most importantly, they have enough to eat. We’re not rich, not by a long shot – we’ve resigned ourselves to the fact that we’re long-term renters, we don’t have fancy gadgets and we don’t have Sky or Virgin – but we have enough money to make sure our children go to bed loved, warm and most importantly, with full bellies.

Which brings me to the point of the post. Not everyone is as lucky as us – some parents don’t have all of those things, and their children don’t go to bed in comfort, or with enough food to sustain them. In fact, 2.3 million children in the world die every SINGLE year from malnutrition and other conditions related to lack of food. In a world where there is enough food, why isn’t there enough food to go around?
Save the Children started a campaign to encourage the Prime Minister to use his presidency at the G8 to tackle the issue of global hunger, and the Craftivist Collective began a large-scale craft project to work in support. The end product was to be a gigantic jigsaw, made from hundreds of pieces with embroidered messages and quotes stitched onto them. Participants were encouraged to make one for the project, one for their local MP and one to keep at home. 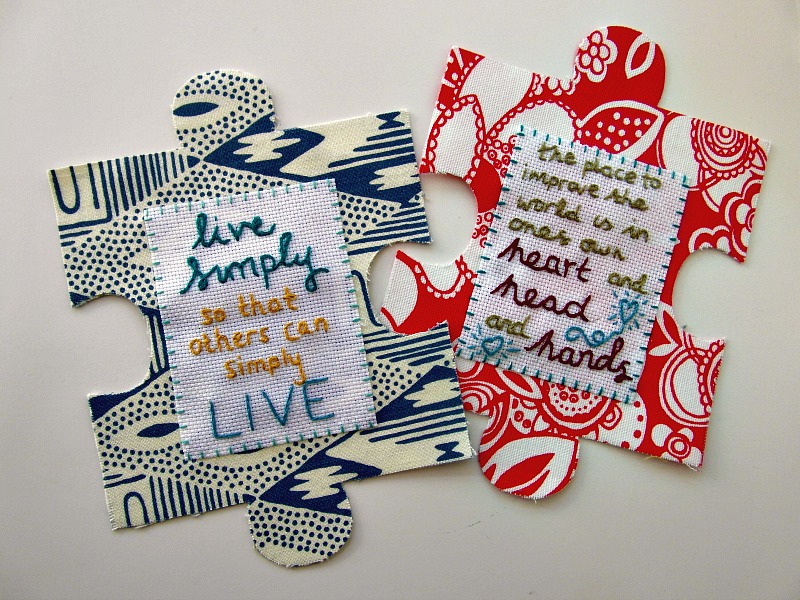 A lot of people delivered their pieces to their MPs in person, but I just didn’t have the time (or, if I’m honest. the balls. It was my first foray into craftivism, and I’m naturally a pretty shy person…), so I wrote David Willetts (the MP for Havant) a two-page-bordering-on-ranty letter about what an absolute disgrace it is that so many simply don’t have enough to eat. I popped his jigsaw piece in with it (he got the one on the left, and the other one went towards the project), shoved it in the postbox on the way to the greengrocers, and then thought nothing more about it. I certainly didn’t expect this: 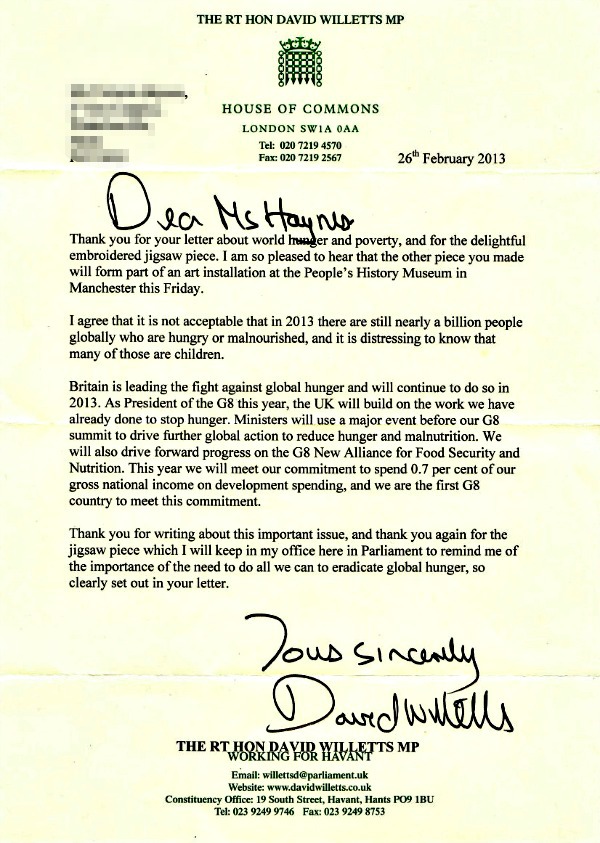 When the envelope with the House of Commons logo on the top plopped onto the doormat, my heart began to beat a teeny bit faster. If I’m honest, I sort of didn’t even think that it would get opened, or if it did, it would just get scoffed at and then thrown in the bin. To have it acknowledged made me feel like I’d done something incredibly worthwhile, and that I might possibly have even made a bit of a difference. Which is a pretty good feeling, in my book.

The pieces were assembled in the Peoples History Museum in Manchester, and unveiled on Friday evening – the photograph below is from the Craftivist Collective Facebook page, and more can be seen here. To read more about the project, visit the Craftivist Collective website (where you can see some of the amazingly beautiful jigsaw pieces and their makers), and don’t forget to sign the petition over on the Save the Children website! 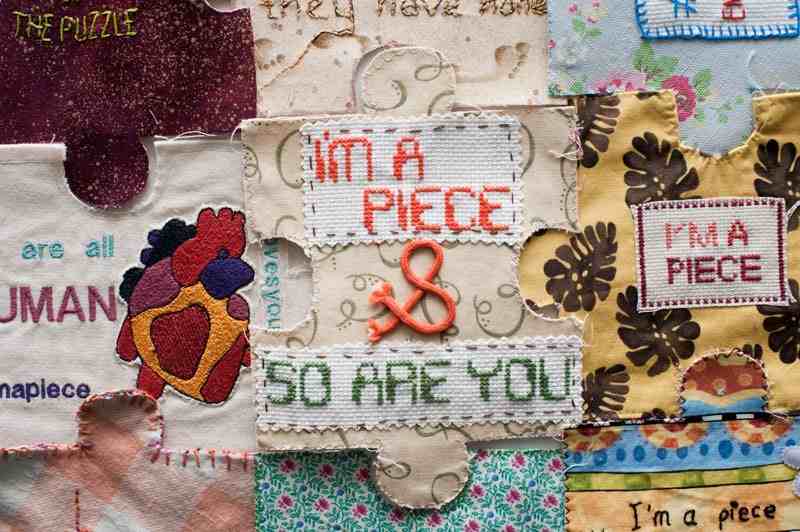