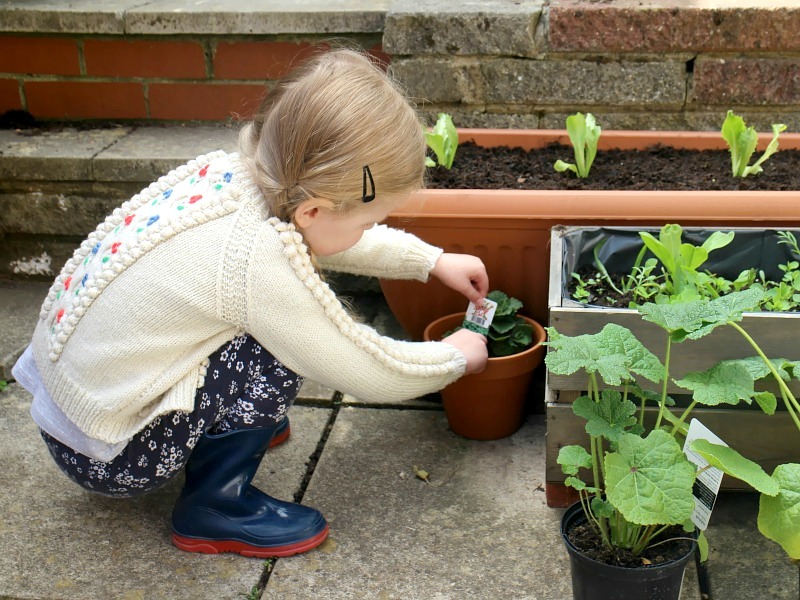 The weather here today is awful, but it’s supposed to pick up over the weekend, so I’m planning to spend the whole time at home – we’ve got heaps of little DIY jobs to finish, and I’ve not started on the garden at all yet this year (so behind!) so there’s not really any time for coffee shops and pottering (boo!).

Whenever I do anything in the garden, the kiddos immediately want to be involved; Ben will sow a couple of seeds and then wander off to look for insects, but Daisy wants to have a go at EVERYTHING. In the beginning, it was a bit of a power struggle between us; she’d want to do something her way, and knowing that it wouldn’t work, I’d try and persuade her otherwise. It would usually end with compost everywhere, scattered seeds and tear stained faces – but over the last couple of years I’ve picked up some ways to make things a whole lot easier.

1. Get a set of mini garden tools
One of my biggest problems was Daisy charging around the garden, using the rake as a pretend horse – I couldn’t relax in case she fell over and impaled herself on the damn thing. A set of mini tools will make them feel like a gardener in their own right, and will be easier for them to handle – you can buy anything from simple trowels and forks to rakes, hoes and wheelbarrows (which will, let’s face it, be used more for wheeling siblings around than anything else).


2. Involve them in choosing seeds and plants
It might just be me, but I think there’s something really exciting about poring over seed catalogues and staring at the racks in the local garden centre (plant geek!) – all that possibility in such tiny packets! You might already have a rough plan of what you want in your garden, but letting the kids choose some seeds of their own will mean they’re invested in the whole growing process from the very beginning.


3. Teach them about garden safety
One of my biggest mistakes was trying to remove everything that was hazardous from the area, rather than educating the kids about it. Obviously with toddlers, this isn’t possible, but once they have a basic grasp of danger, you can teach them about poisonous plants, thorns, stinging nettles and any chemicals that you might have in your gardening arsenal (we don’t use anything chemical-based, but I know a lot of people do).


4. Buy some children’s gardening and nature books
In the same way gardening is a learning curve for adults, it’s the same for children – they’re probably not going to want to sit and watch Gardeners World with you (although you can try and convince them, like I did!), but there are plenty of books aimed at youngsters which will get them fired up. We love Miffy in the Garden, The Little Gardener, Eddie’s Garden and The Tiny Seed.


5. Give them their own area of the garden
Nothing makes children want to take care of something more than when they feel like it’s their own – section off a sunny corner of a flowerbed, give them a long trough to fill with compost or supply them with a few flowerpots and let them do with it whatever they like. Even if that does just mostly involve digging holes!