This is a post I’ve been planning for literally months, but due to utterly rubbish light levels in the bedroom, I couldn’t take as many pictures as I wanted – our room never, EVER seems to get enough light to photograph anything clearly or sharply, and I don’t have the patience to sit there with a tripod, and then edit them all in Photoshop! So apologies for the first few pictures, which really don’t do this little baby-space justice…..

I’m a big fan of attachment-parenting, which is why we’ll have the baby in with us for the first year or so – after that hopefully we’ll be able to move to a three-bedroom place, otherwise she’ll be sharing with her brother. So  while we technically have no nursery for her, a corner of our bedroom has been dedicated to looking as calm and pretty as possible – think vintage clothes hanging on the walls, customised tassled vintage lamps, floral pillows (please don’t write me a load of e-mails telling me this isn’t safe – it’s literally for decoration when she’s not actually in there!), hand sewn cot sheets and some pretty pictures on the walls. We don’t have much money, but my main belief is that you don’t need a great deal of cash to make your space your own – you simply need a little imagination and effort. 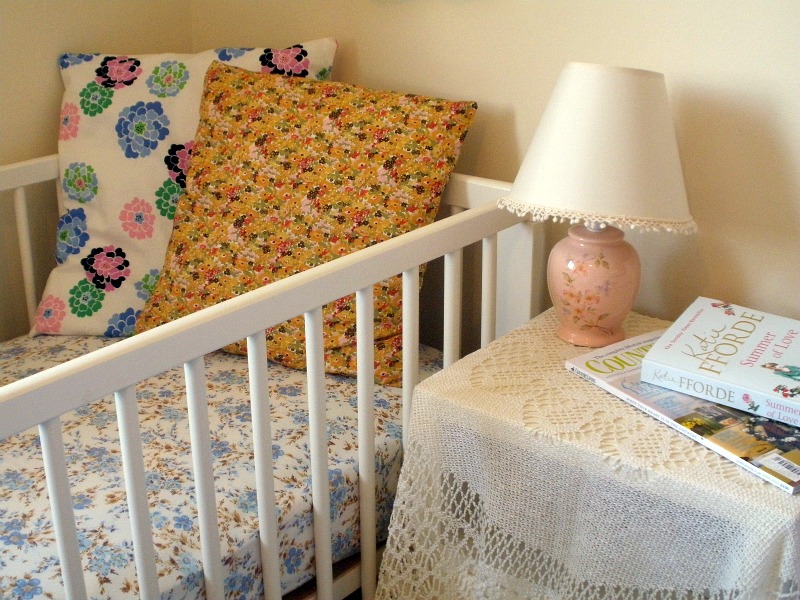 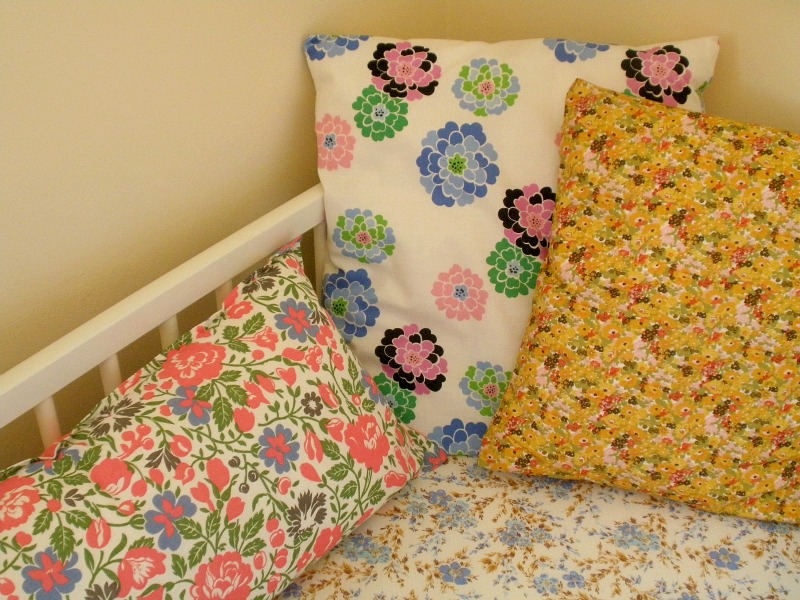 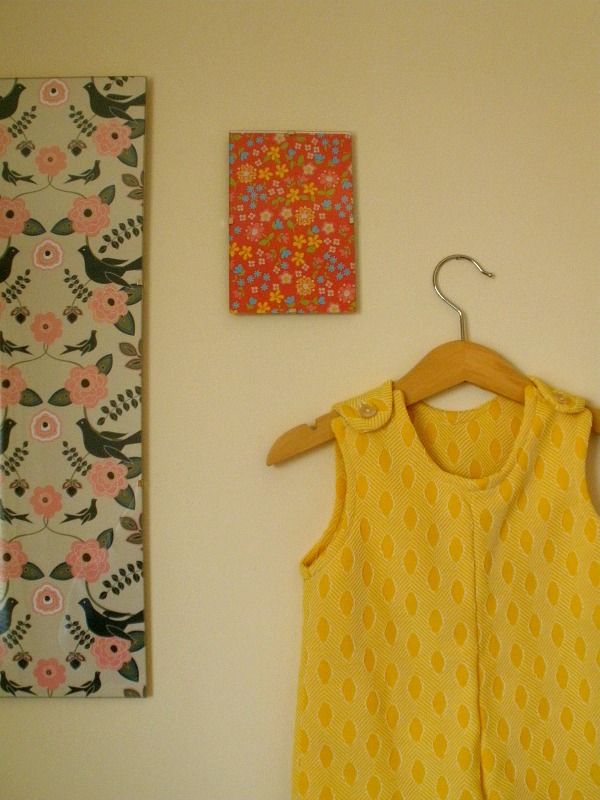 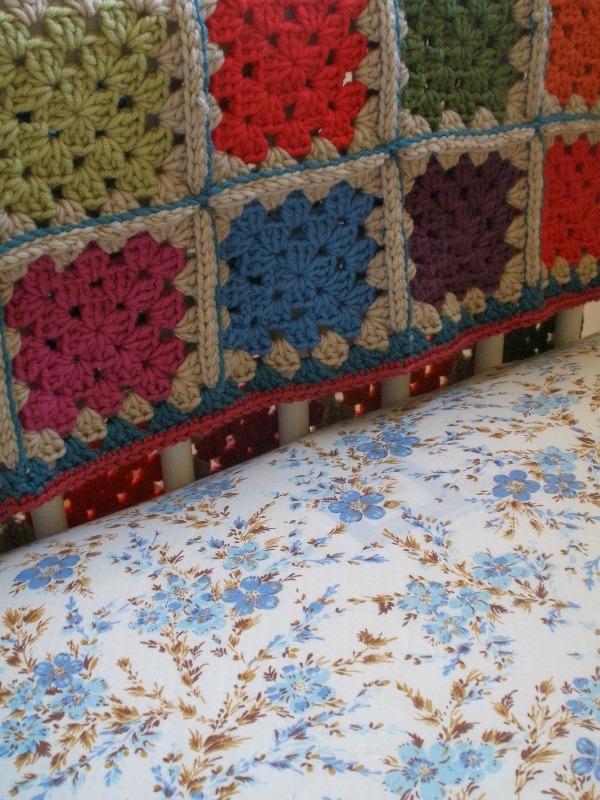 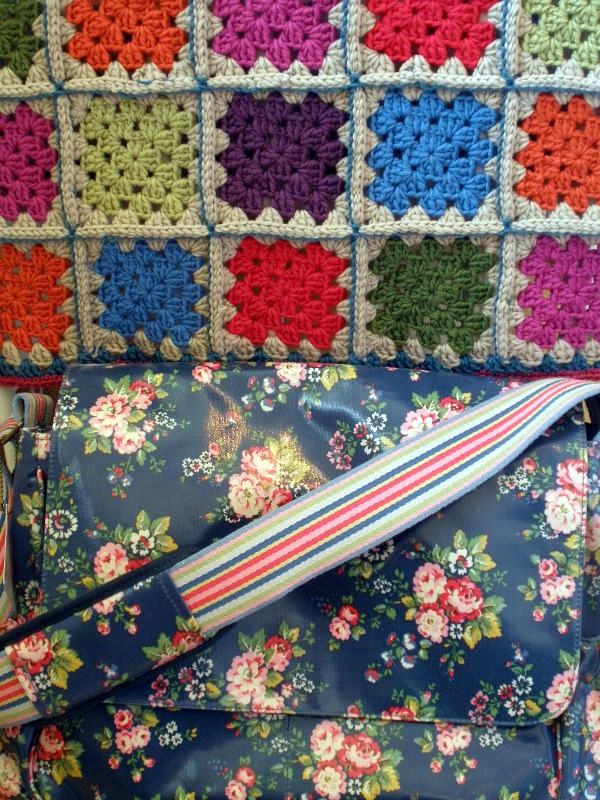 We’ve decided to give cloth nappies a go this time – although I’ve also stocked up on the eco-disposables. As we currently live in a flat (until the middle of next month anyway, squeeeeal!), I’m not entirely sure how the washing and drying process is going to go. Eco-disposables are almost as good, and I’ve discovered Naturebotts, an online company who stock a fairly good range, which don’t cost any more than your standard shop-bought disposable.I think the thing is to remember that while making ecologically sound decisions is obviously up there in my list of priorities, whatever is best for baby and easiest for Mama is the most important thing – a new baby can be stressful enough, without adding to the mix! 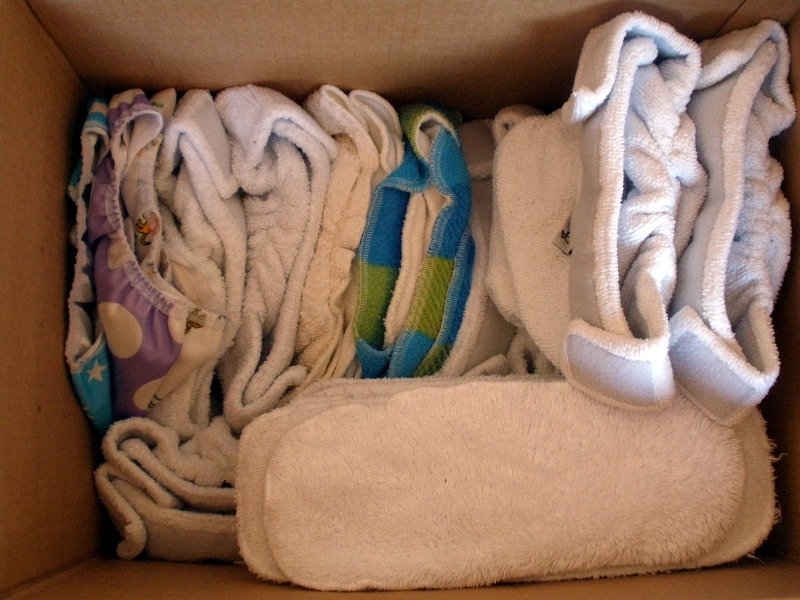 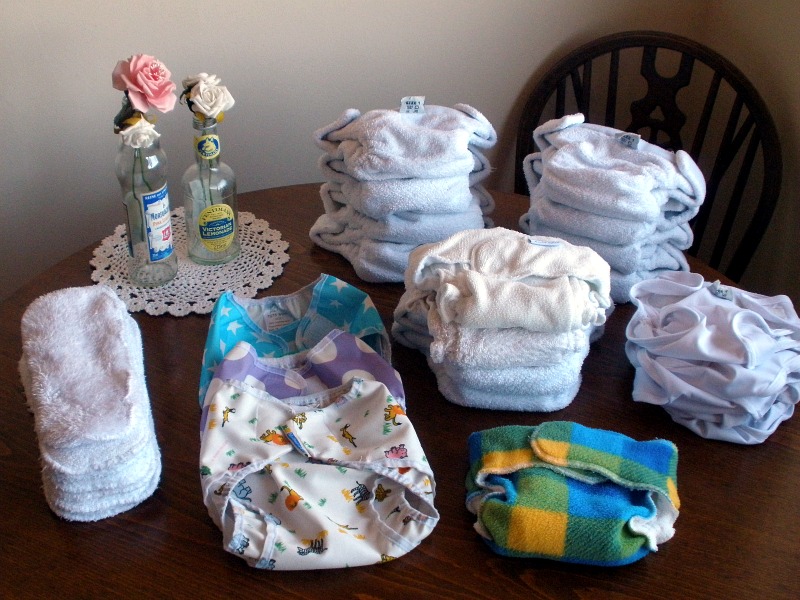 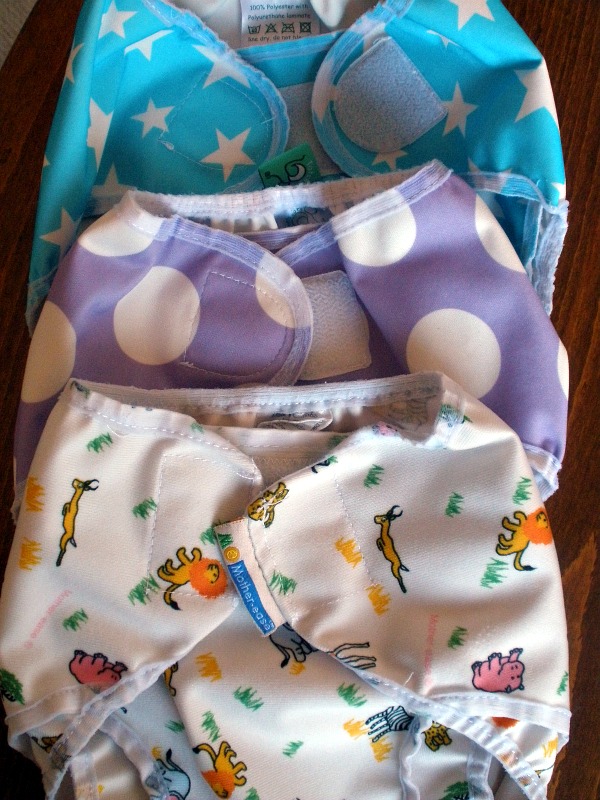 I wanted to craft as much as possible for this baby, as I didn’t manage anything like that before the Boy was born – I couldn’t crochet back then, and I had no sewing machine (he’s had plenty of handmade things from me since, though, he certainly hasn’t gone without!), so I wanted to squeeze in as much as I could this time around. I think there’s certainly been an element of “ooooh, a GIRL! Florals and patterns and vintage, oh my!” which has kept me motivated – it’s far easier to find vintage fabrics suited to girls bibs and clothes than it is boys anyway.

I started by making a few bibs – I was going to use the pattern from ‘Bend the Rules Sewing’ by Amy Karol, but having to go all the way to the library to enlarge it on the photocopier seemed like such a faff that I went with the one I found on the lovely Chickpea Sewing Studio blog instead. It was really simple to do, and even easy to sew – I still need to add the poppers to fasten them on the neck, but on the whole I’m pretty pleased with how they turned out…. 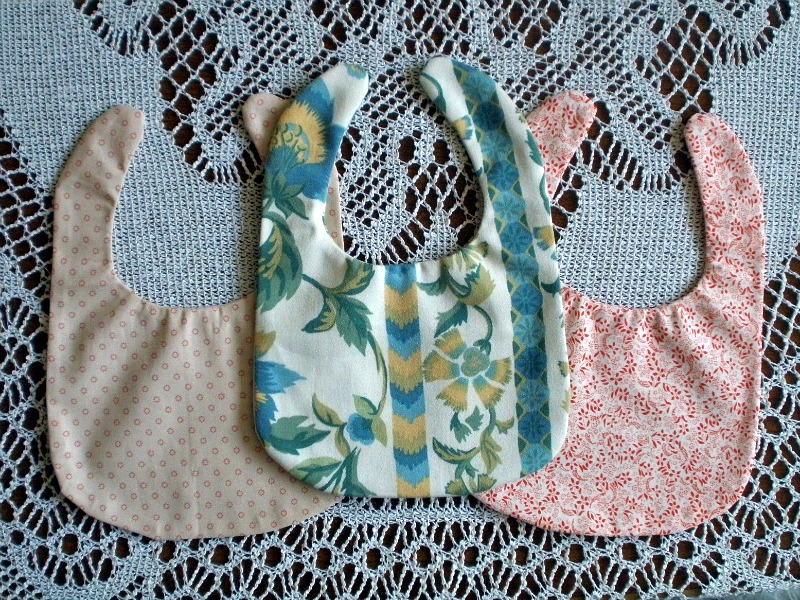 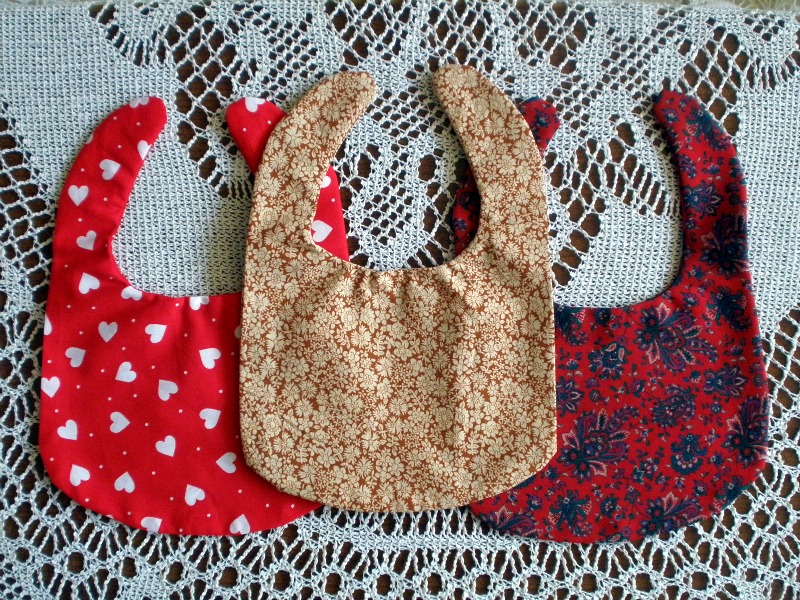 Crochet was obviously always going to feature quite heavily in anything I crafted for this little one – I found a couple of bib patterns in ‘Cute and Easy Crochet’ by Nikki Trench (one of the best crochet books ever – such lovely projects to sit and drool over!), and added the wavy border onto the pink one at the last minute. The little shoes pattern is from ‘Little Crochet’ by Linda Permann, which is another great crochet book for babies and toddlers. I have a feeling this little one is going to end up with quite a lot of crocheted legwarmers…. 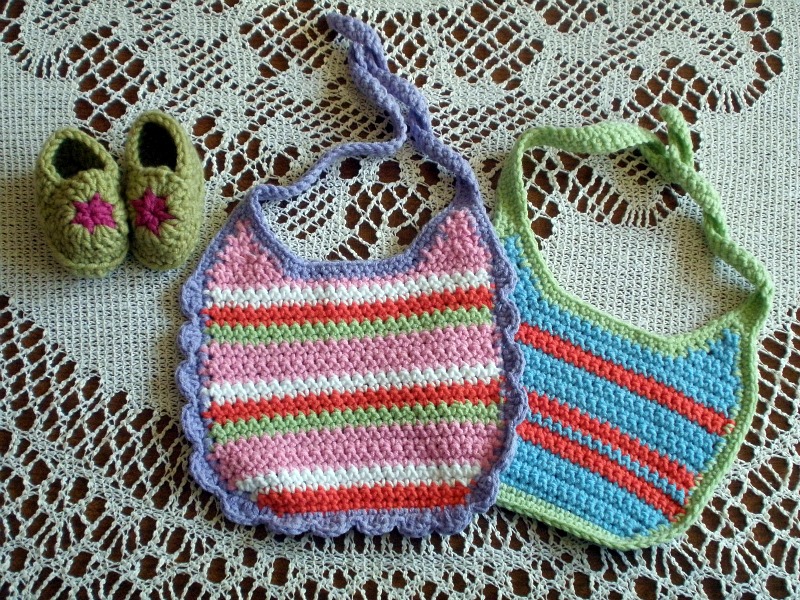 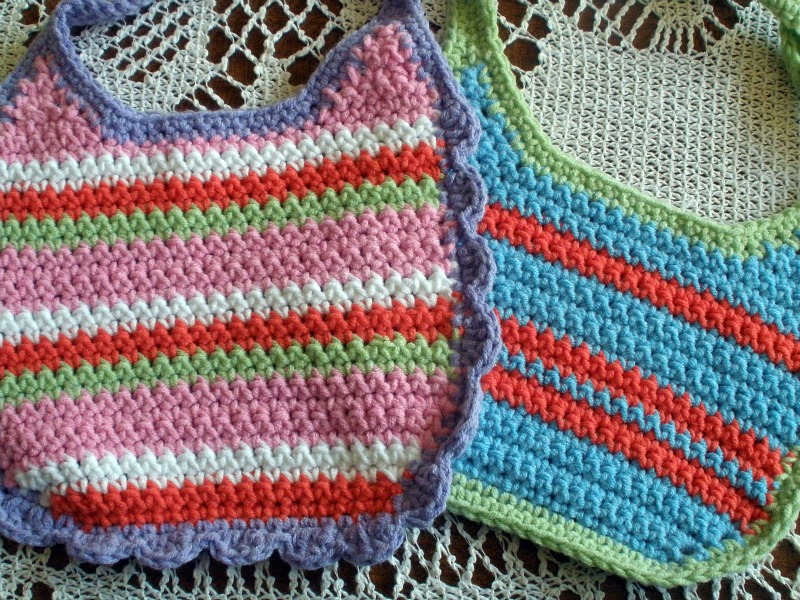 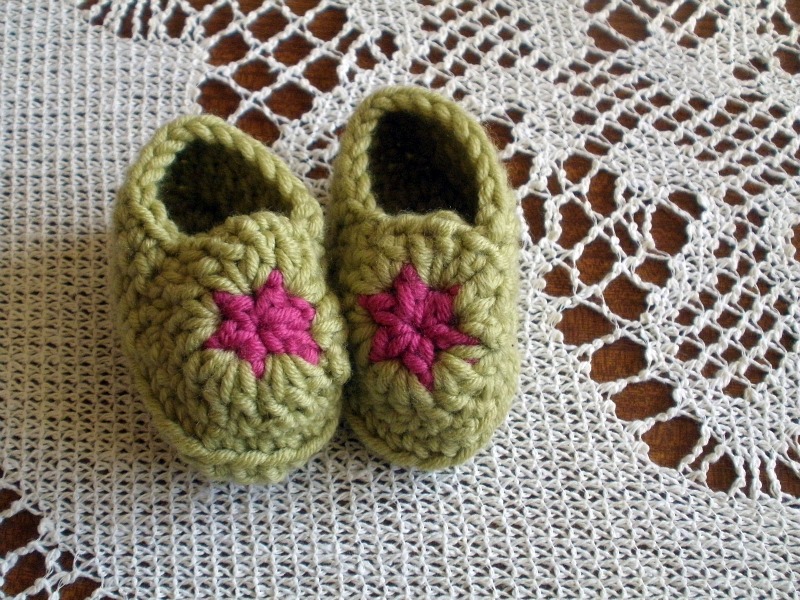 The baby blanket – ahhhh, the baby blanket. In the end, I detested this thing so much, I ended up nicknaming it something rude. The thing was, I started it over a year ago, found the un-joined squares at the bottom of my project basket, and decided they would be perfect for a pram blanket. What I didn’t know was that in the last year, the beige colour I used for the edging (and subsequently needed more of to join the squares) had been discontinued. The lovely lady in my local yarn store suggested something cheap in a similar shade, but this had disasterous results, and saw me sitting on the sofa at midnight one night, waving my fist at a ball of wool. In the end, I chose Sirdar Aran Cashmerino (which cost an amount I’m not even going to divulge… gulp…) in a nice bright colour that fitted in with the squares, and joined them with a seam designed to show, then added a couple of border rows. I have to admit, now it’s all done I am pretty pleased with it, and it is the softest thing ever – but the moral of the story? Don’t leave your projects languishing in a pile and expect them to be easy to finish later! 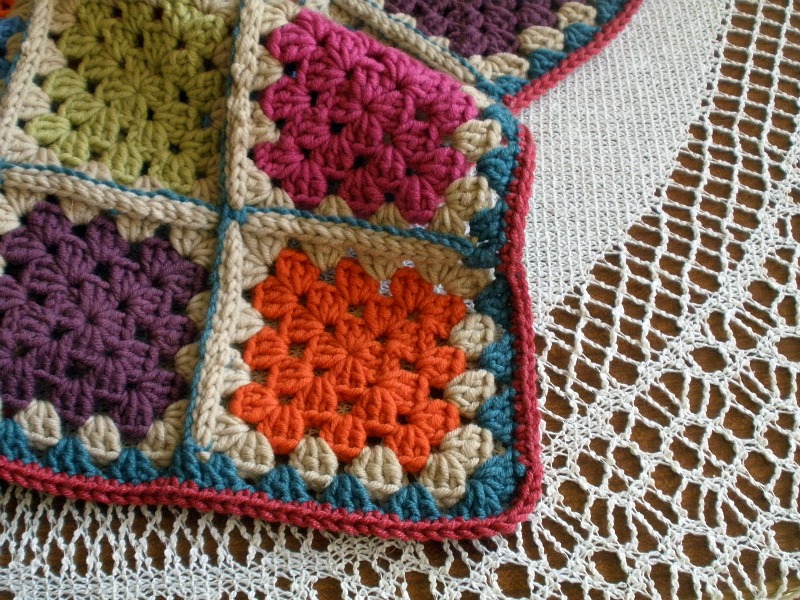 My last crafty effort was a bit of a cobble-together – I had an oilcloth apron from Cath Kidston, which I never used (not a fan of oilcloth aprons – I find they’re too inflexible), but didn’t want to waste, a pile of leftover wadding and a large amount of stripey canvas fabric. A little snip here, some pinning there and I had myself a rather snazzy changing mat – which can also be turned over and used as a mat for simply lying on in the garden on a warm Spring day. If she ever puts in an appearance, that is…… 40+3 and counting…… 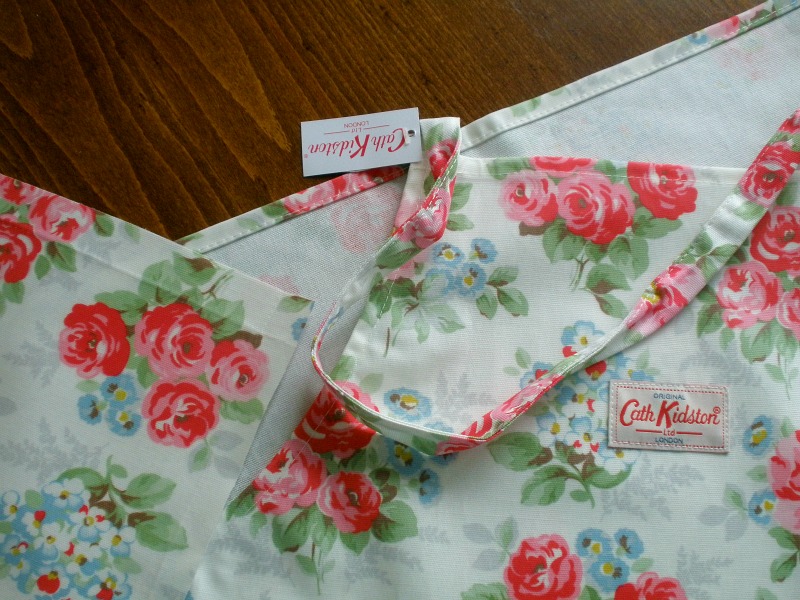 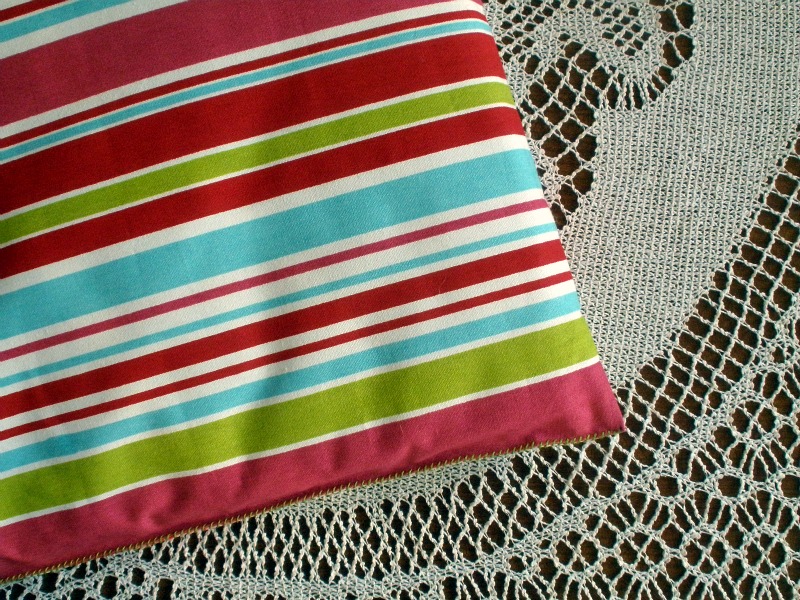 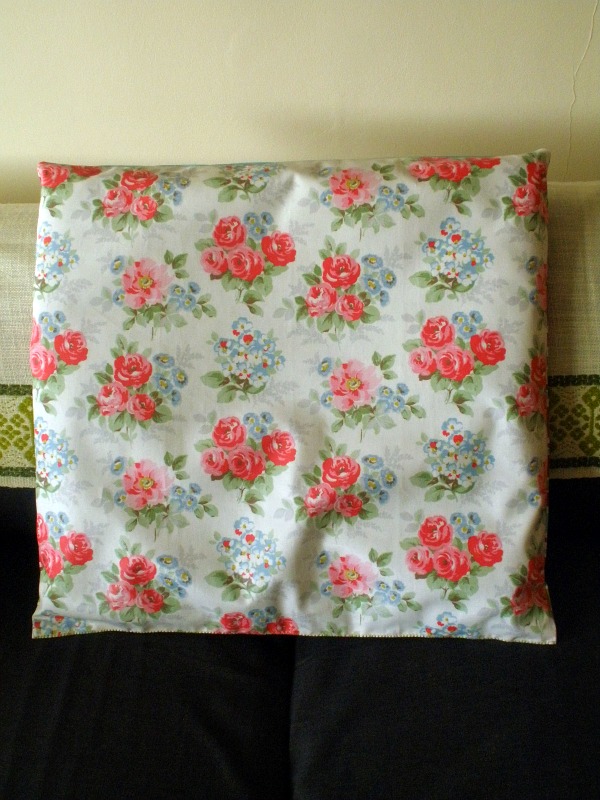