Southsea is quite renowned for its car boot sales, but when we went out for the day the other week, I got a tip off from a shop-owner that the council had STOPPED them, and the two that usually ran over the summer months were dead and buried. I must have looked on the verge of a panic attack, as he went on to let me know about a gigantic indoor boot sale that happened on the last Sunday of every month. Unlike the others, this one runs throughout the year, and means that even if its pouring with rain, you can still get your junk-fix. Hurrah!

I decided to wear my new vintage cardigan (with no coat!) that I’d bought the week before, because obviously indoors meant toasty warm. Stupidly, I hadn’t considered that there would be a queue a mile long, and that getting there ten minutes before the doors opened didn’t really qualify as ‘early’. Doh! 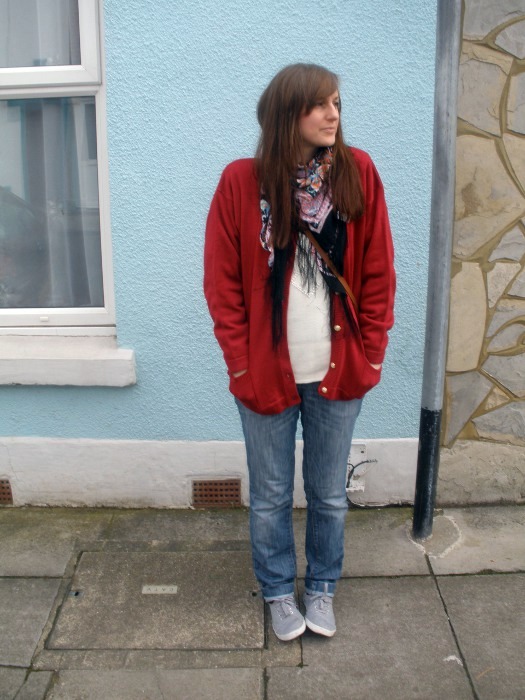 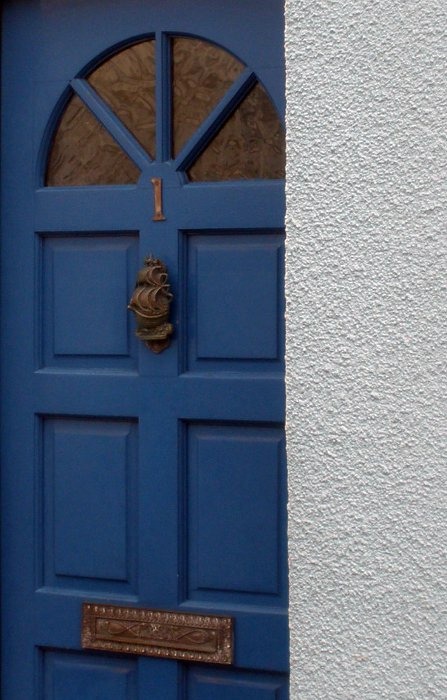 The second photo above actually has nothing to do with the car boot sale, but we snapped it while walking down the road – how wonderful is the door knocker? And I love the little engraved letterbox too, I’m going to file that photo in my ‘future home’ folder I think!

Once we had queued in the freezing cold for what felt like days, the doors opened and before we knew it, we were through the main door. Then, more queuing, trying to bump the buggy up some steps, a 50p entry fee and….we were in! It started off calmly enough, but unlike outdoor boot sales there was limited space inside and we started to regret bringing the buggy (but not the Boy, he was on his best behaviour, takes after his mother for his love of junk!) almost immediately. There were heaps of people (some with buggies, others with wheelchairs), extremely narrow walkways and quite a lot of elbowing. I managed to come away with some real treasures, though, and the Boy was given an inflatable lemon and a blow-up guitar. Result! 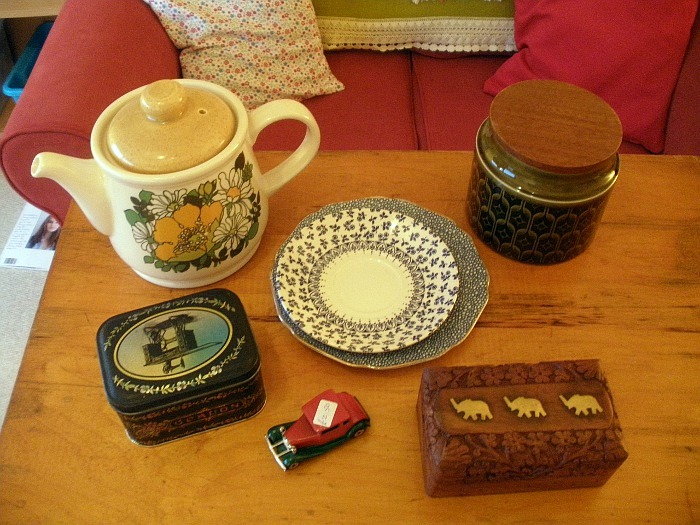 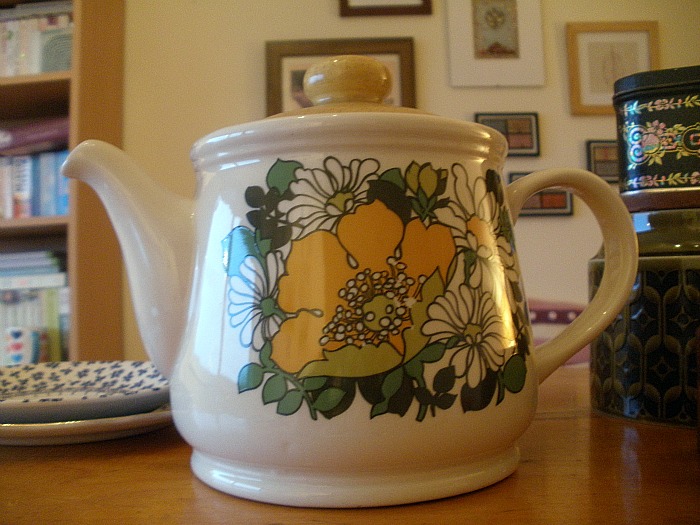 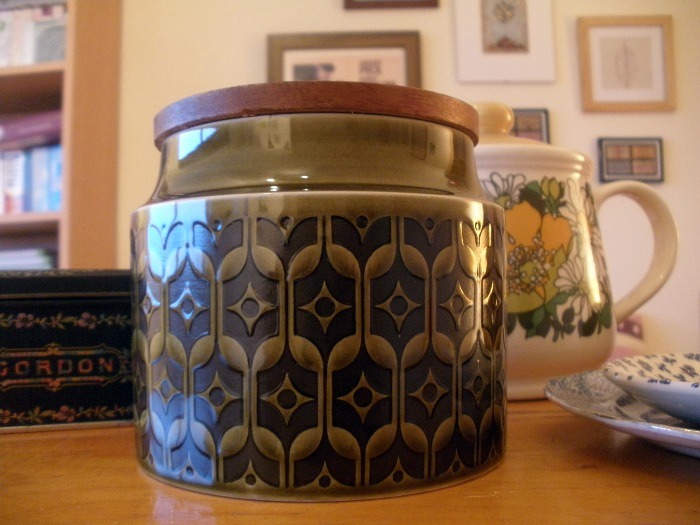 I literally dived on the kitchenware – I have a real thing for olive green and mustard yellow at the moment, and I love the 1970s pattern on the biscuit barrel. The design on the teapot is quite similar to a cup I bought from a charity shop a little while ago, and I just love the colours. 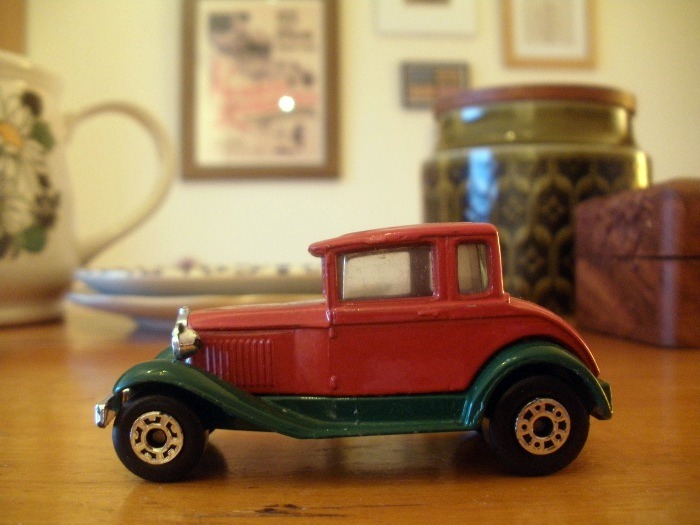 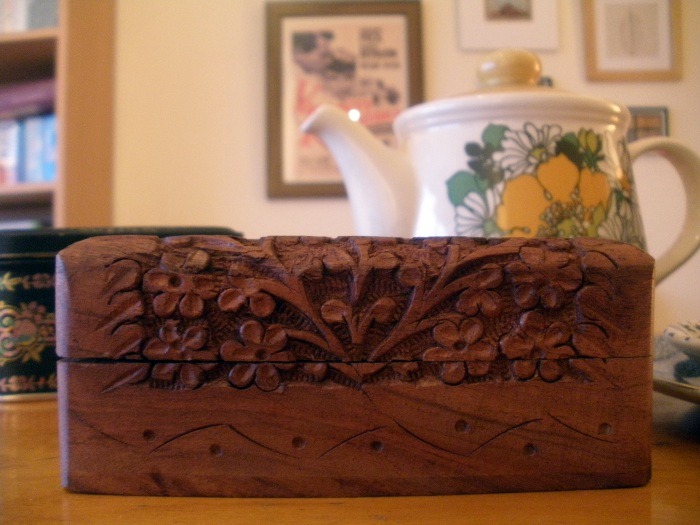 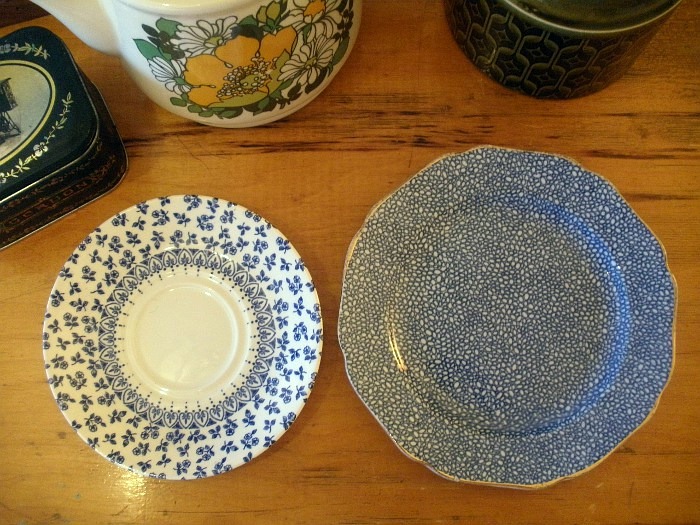 The little car was a Matchbox original, and belonged to the son of a lady who was selling a whole load of trinkets and delights. I picked it up immediately, thinking that it would look perfect on the long shelf in the Boy’s room, and she told me how it had been well loved. A little way along I discovered the engraved box, which was only £1 – bargain of the day, I think. It smelt slightly of sandalwood, and my Mum said it had probably been used to hold incense. It now sits happily on my shelf, holding nothing but looking lovely! I can never ignore a nice plate or saucer, and the blue ones above were only 50p each – I’m starting to amass such a collection that I’ve run out of room in the kitchen. Plate display ideas, anyone?! 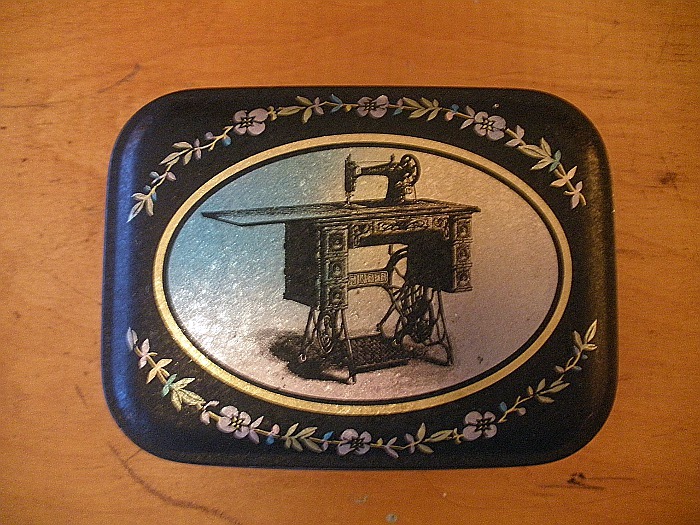 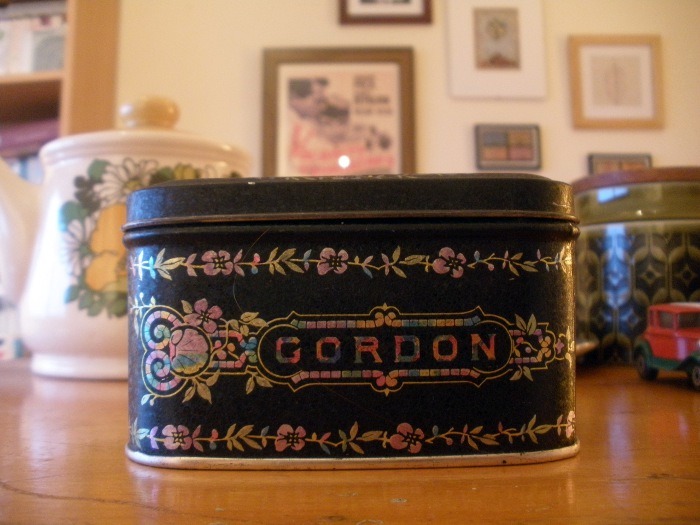 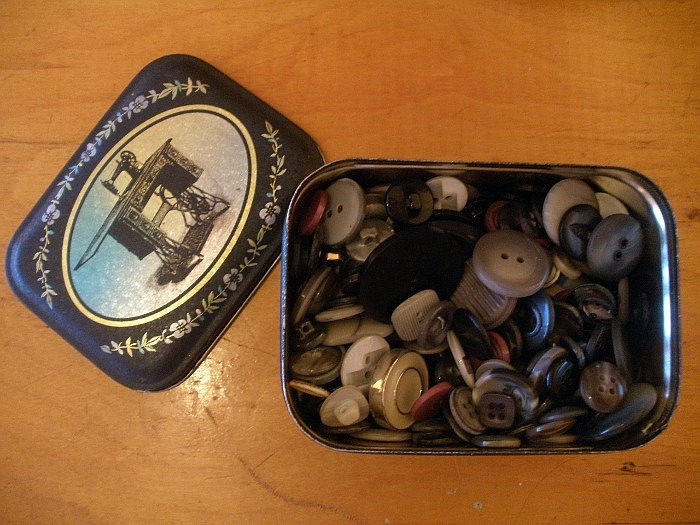 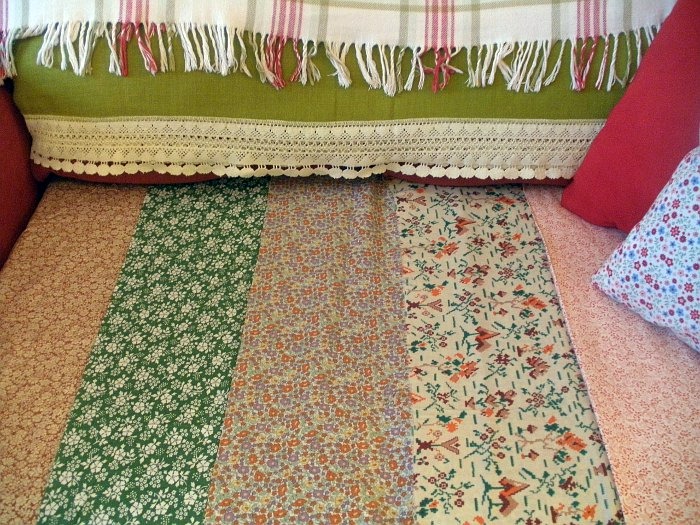 I think my very favourite stall was the one where I found the button tin and vintage fabric. I picked up the tin originally, and asked how much it was, and the lady told me £3 – after opening it, I discovered it was full to the brim with vintage buttons, and she said she should have asked for more, but someone else had priced it. I said that as it was going to such a good cause (she was collecting for a local hospice) I didn’t mind paying extra, and we settled on £5. As I was about to wander away, I noticed she had some fabric in a basket, and she asked if I did any quilting – I said I hadn’t, but I do sew quite frequently, and she showed me these little beauties! I’m SO happy with the fabrics (you might recognize the green one from the previous post where I covered my old chair!), and they were only £1 each, for roughly a fat quarter sized piece. The lady told me that they used to run a family fabric business, and since retiring had been trying to sell off the leftover stock – we were talking about all the old things she has that used to belong to her mother and grandmother, and that her daughter hasn’t inherited the love of old things, and keeps threatening to put it all in a skip! I told her it was criminal, and that I would see her next month. A skip! 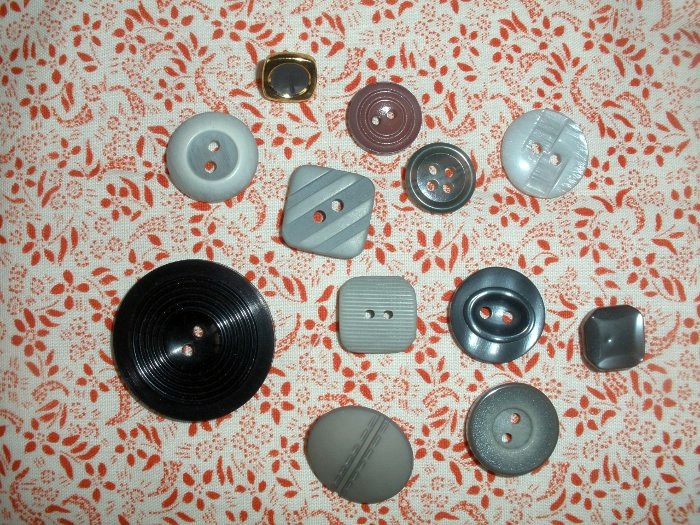 On the way home, we stopped at our local furniture flea market, and somehow I ended up coming out with a 1950s cabinet and a nest of two tables! Cue much flustered swearing from the Husband as he tried his best to squeeze everything into the boot of our rather tiny car, while I helpfully danced about shouting, “be CAREFUL! Don’t SCRATCH them!” 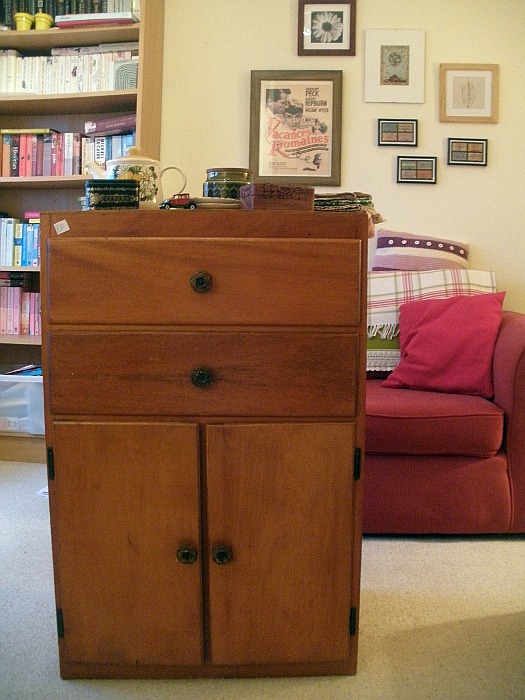 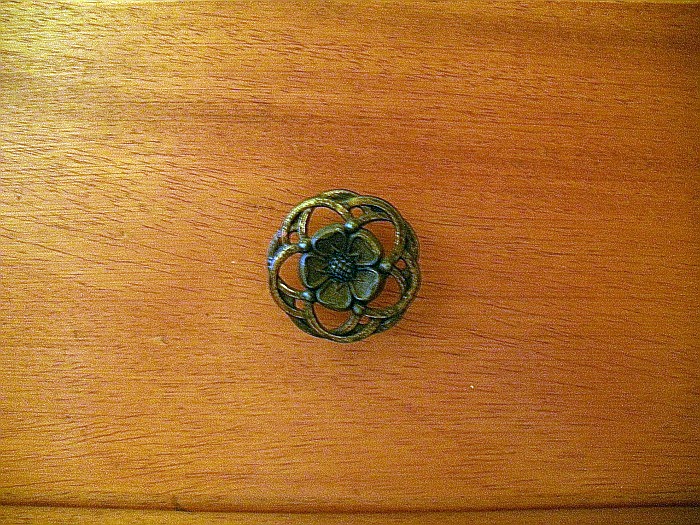 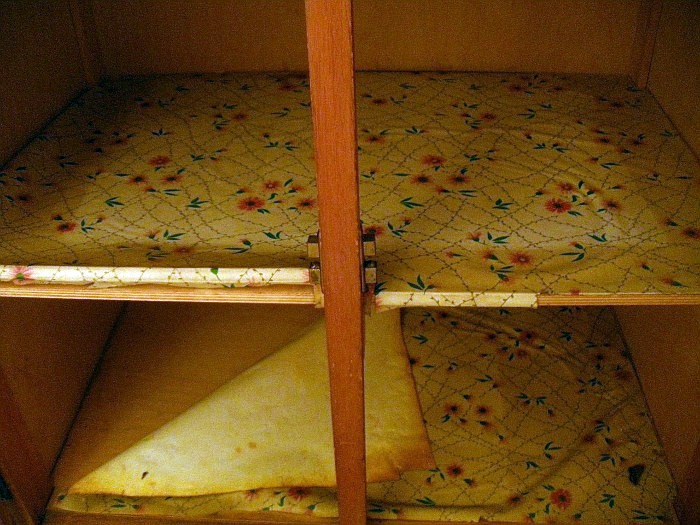 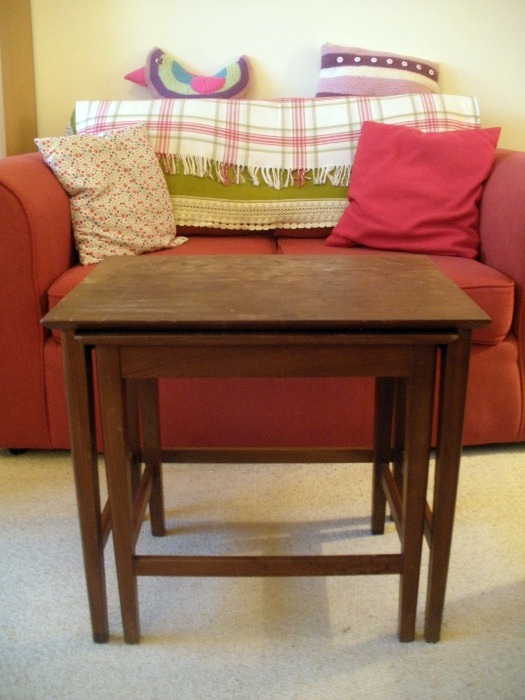 I love absolutely everything about the cabinet – the beautiful metal carved handles, the old smell, the fact that next to our MDF horror-furniture, it seems so sturdy…. When I opened the doors in the shop, I saw that someone had used either wrapping paper or wallpaper to line the shelves, but sadly it was damp and torn around the edges. Never one to be defeated, I peeled it off carefully, and think I managed to salvage enough to put in a frame on the wall. 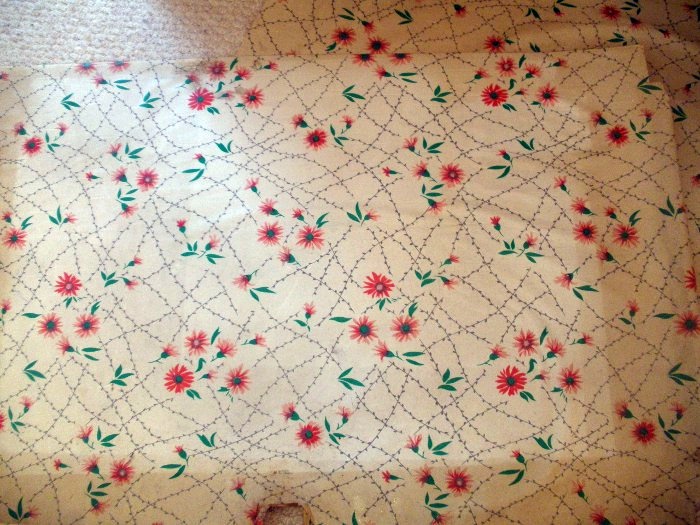 The cabinet and one of the tables were quickly put to use in the hallway, housing my sewing machine and endless crafty bits and pieces. I know it sounds sad, but I get such a thrill from seeing them every time I walk past – so much better than an awful desk from Argos! 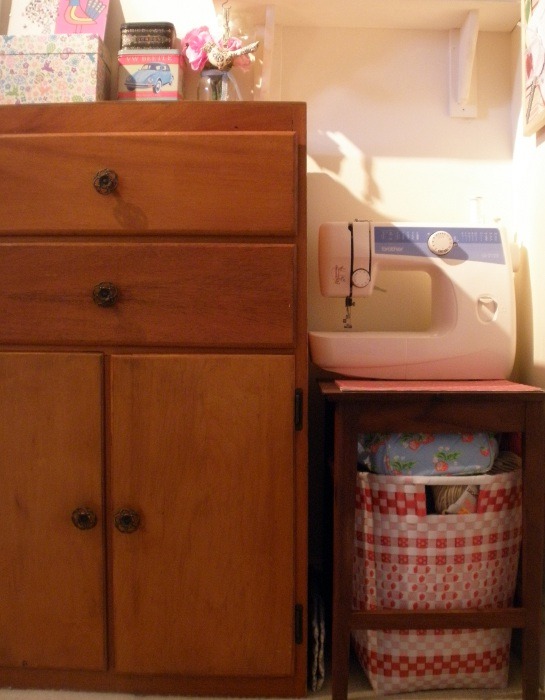 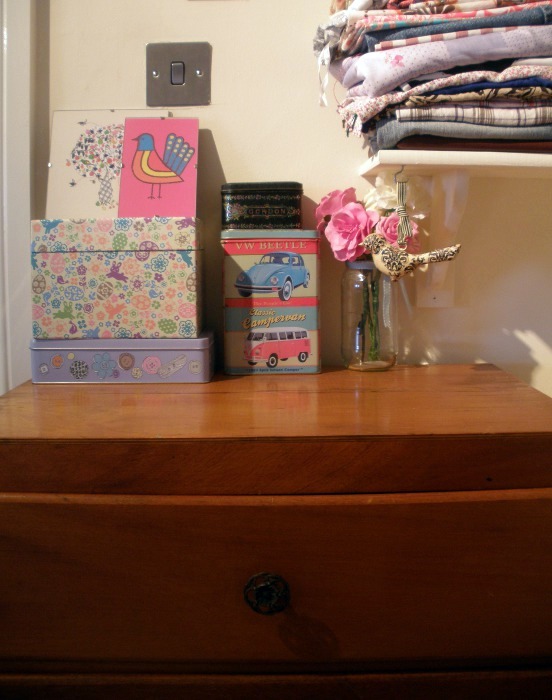