In the third instalment of Bloggers at Home, I’m pleased to be featuring the lovely Jen from Little Birdie; one of my favourite blogs, Jen writes about great design, shares delicious recipes and occasionally posts pictures of her beautiful home (check out her Instagram feed for some amazing pictures – it’s a great source of inspiration!).

I’m Jen from Little Birdie. I write about my family life, food and interiors. I was thrilled to be asked by Vicky to do a guest post on my favourite room in my home.

We live in a tiny two-bedroom end terrace house in Leeds, West Yorkshire. I’ve always like interiors, particularly bright, happy family homes, and I love a mix of classic design pieces mixed with some vintage treasures. I like to create a home that is colourful and quirky, but do so on a tight budget. It’s difficult to say what my favourite room is, but I had the most fun decorating my son’s room, so I thought I’d show you that one! 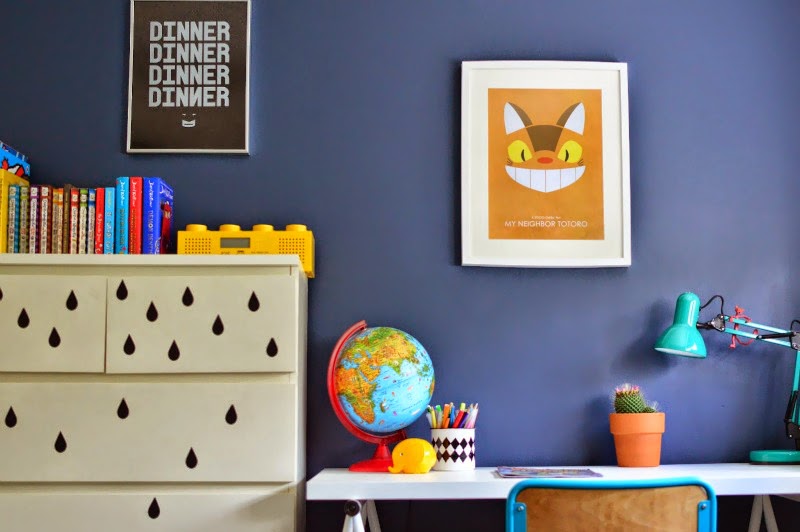 Harry is almost eleven now, and his room has changed a lot over the years. Now it’s less about Lego and more about his interests in computers and programming; he’s very geeky and not at all sporty, but at least that means I never had to have a room full of football designs! (And yes, his room has been cleaned and tidied to take these pictures; it’s usually a filthy pigsty rammed full of video game cases, laptops, missing socks, old crisp wrappers and endless empty cups of juice. The teenage years are heading our way!) 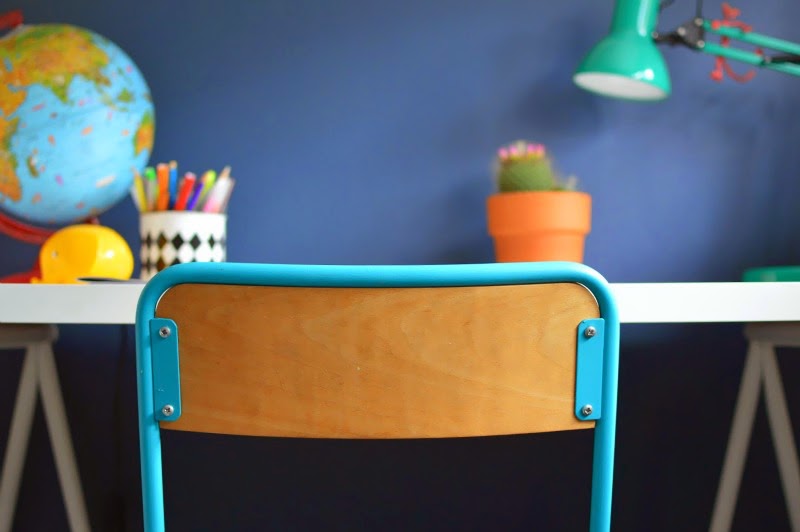 Although his room is predominantly white, we recently painted one wall a lovely navy blue shade, called Breton Blue by Dulux – it’s given the white furniture a real life, and has made the artwork stand out more. Harry needed a new desk suddenly, as he has suddenly grown almost as tall as me; we bought the table top from IKEA, but used some vintage Habitat trestle legs (which were actually mine from my teenage bedroom!). Years ago, I won six vintage school chairs on eBay, which have been sitting in the shed ever since – I’d always planned on painting the metal framework on the chairs but never managed to get round to it. I finally managed to do one in Kingfisher Blue from Habitat, and I absolutely love the end result – just another five to go! I also bought a new anglepoise style lamp in this gorgeous jade green colour from RadStudio in Saltaire.

These are two of my favourite little things on his desk; the yellow elephant moneybox by OMM design has come to be a bit of a design classic recently, and I love it – Harry saves up his pocket money in the elephant to buy new comic books, and this is one of his favourites, The Phoenix. The bendy Pink Panther toy on his lamp belonged to my Grandpa, and I can always remember it climbing up his shelving unit where he kept his huge stereo system. It’s a bit of a treasured piece for me as I was very close to my Grandpa, and I love that it’s one of Harry’s favourite things too. 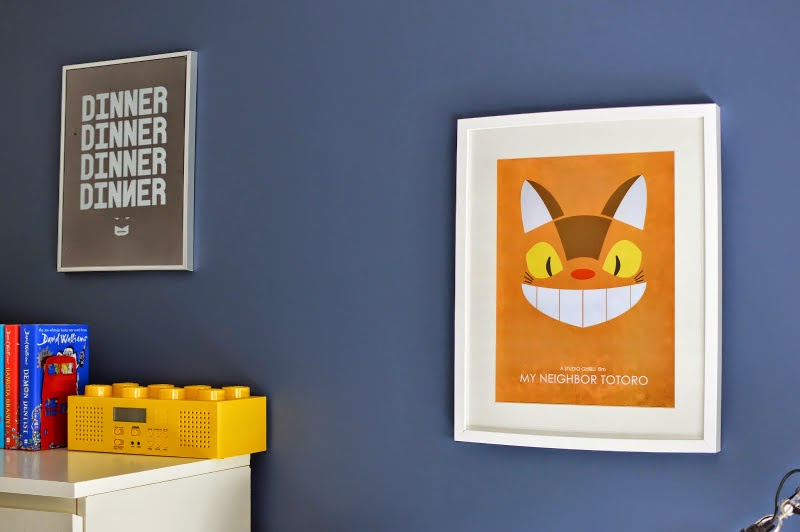 Not only is Harry a big fan of comic books, he also loves the Studio Ghibli films, especially, ‘My Neighbour Totoro’. I wanted to get him a poster from the movie to go above his desk, and came across the artwork of Jon Glanville who designs his own versions of Ghibli classics – together we picked out the Catbus print as we both loved it. The Batman print by HelloDodo above the chest of drawers came from a fantastic local Leeds shop, Chirpy. 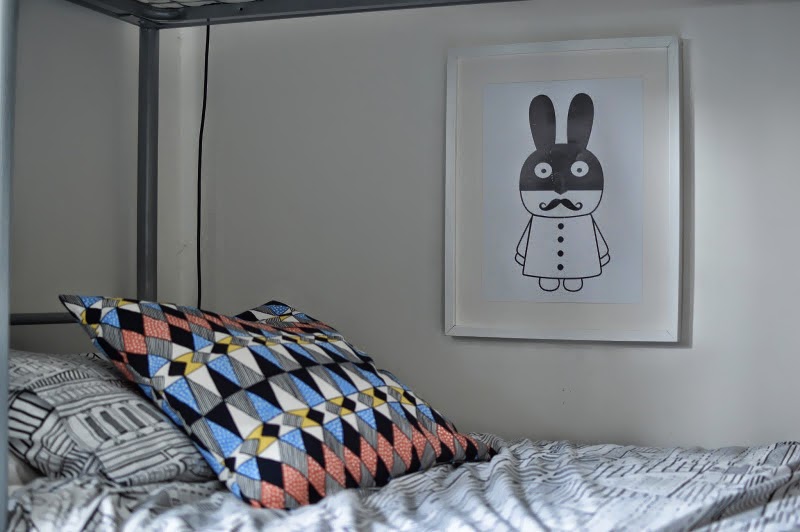 Harry has a set of bunk beds in his bedroom; he sleeps in the top, while the bottom one is for sleepovers. We’ve gone through a lot of bed changes in this house, from cots to toddler beds, cabin beds and now these ones from IKEA. Our ancient old cat likes to sleep on the bottom bunk a lot, and she especially likes to cosy up to this pillow and cushion. The bedding set is from Wilkinson (I love Wilkos!) and the cushion was from IKEA; both were really cheap but great quality – I don’t think that good design has to be expensive. The bunny print is by Scandi designer MiniWilla. 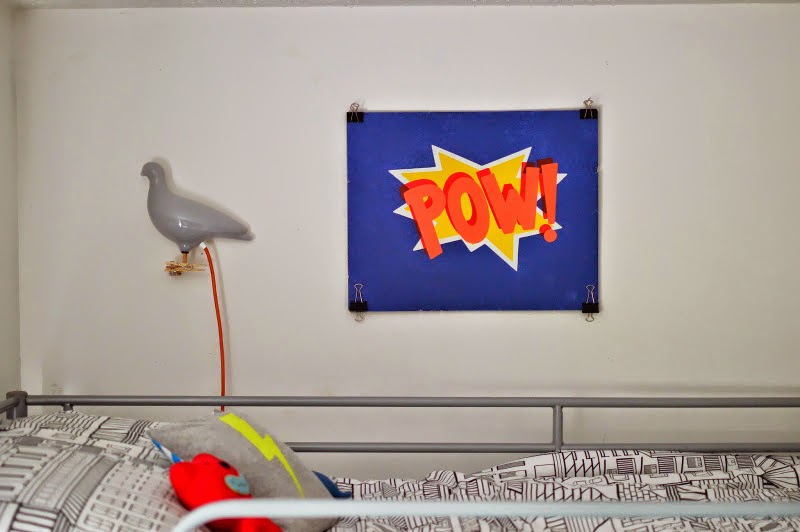 On the top bunk, I chose the pigeon light by Ed Carpenter in grey with the bright orange flex. I’ve wanted on of those lights myself for years (especially the hot pink one!) and could never really think of anywhere for it to go, but then decided it would be perfect as a bedside light. It gives off a really gentle glow which I like for reading at bedtime. The ‘Pow’ print is by Dandy Star and I’ve had this since Harry was really little; I always liked their comic book style prints, and thought it would be lovely for a boys room – I didn’t know then that Harry would be interested in comic books, but it has fit in really nicely. 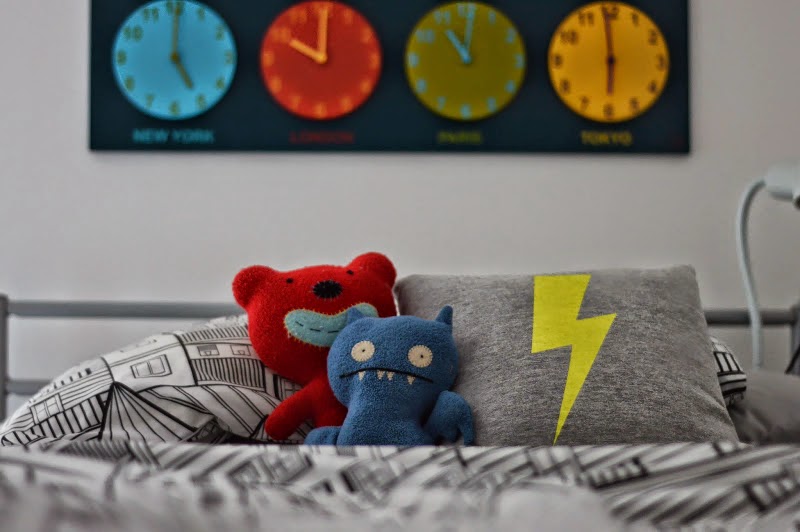 Even though he is nearly eleven, Harry still likes a cuddly toy to go to bed with – these are his two favourites, Ice Bat and Big Ted. He has this Ferm Living cushion to prop himself up with whilst he reads in bed, and the clock behind is from Habitat. Only the UK time is correct though, as each clock needs two batteries and it makes the loudest ticking noise when all the clocks are in use. I was sleeping in his room one night and the bloody thing kept me up for hours! 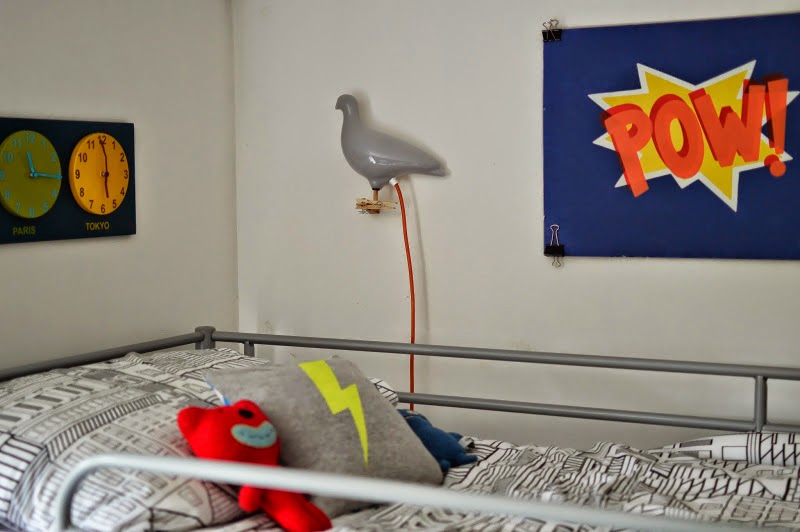 So, that’s pretty much it. Harry loves his room as much as I do, but I know that it’ll change again as he gets a bit older. And I suppose I’ll have a lot less say in it too!

I hope you’ve enjoyed this mini tour. If you’d like to come and say hi, then please pop over and visit me at Little Birdie. Thanks for reading!